How A Writer Earns Their Stripes

The last post was a wordy answer to the question I often receive at writing workshops: "How do I become a writer?" There are a lot of things that move people toward writing, but the act of 'being a writer' takes that extra push. It takes focus, habits, and no shortage of humility. But once we start incorporating those into our daily routine, does that just make us writers? Do we suddenly qualify as members of the writing community? Is there an initiation where we learn the secret handshake? At what point are we allowed to call ourselves writers? 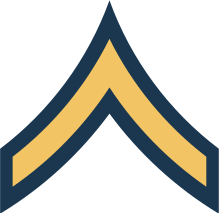 I will offer this as my response. If we write, and in our mind we have dedicated ourselves to this end, then we qualify as an official writer. Maybe our rank isn't that high - in the US Army, we would be recruits without even a patch sewn to our uniform. But even Private No-Stripes is still a member of the army and can refer to themselves as such. We are probably looking for more than that when we write, so how do we earn our stripes as writers?

Like most things, we only really become that thing we want to be when we start acting like it. Like Private No-Stripes, we need to develop not just the habits, but the mindset to really move up in the world and not feel like a recruit. We need to focus, and write regularly, and act out those habits until we no longer think about them. Once we fall into the habit of writing as a way of managing our ideas, we become a writer. As we think about how to present an idea as a story or an essay, that writer in us grows. As our writer kit fills with tricks and tools and we use them more and more, we establish ourselves as official writers. We earn that first stripe, and nobody can question that we are writers.

More than likely, we will question it for a while, but that's a different hurdle to conquer.

I often mention the pen and stack of Post-It notes by my bed. This is a writing habit I developed years ago, and it was pivotal in the creation of my first published story. In the middle of the night, my mind starts throwing around ideas for no particular reason. We all get that restless mind thing now and then, but with me, it happens to the point where I decided to grab the weird ideas and write them on Post-It notes. It helped me sleep, but also provided fertile ideas for the writer in me. The pad will be tucked full of writing prompts, some of which are even readable.

These might sound weird, but here are a few:


Do any of those make sense? It doesn't matter. Somewhere in my mind, a group of tired synapses brought out some weird ideas, and get triggered when I read the note. As a person trying to sleep, I'm not concerned about writing. However, the once I am awake, writer in me sees a chance to explore. I saved them for writing prompts on those days when I want to write but don't have any ideas really jumping at me.

Does doing this make me a writer? Well, not on its own. However, acting upon it gets me closer. As I mentioned before, one of those little notes became my first published story, "The World's Biggest Snowball Fight." (a polished draft can be read at this site).

I like to think that such commitment was what gave me my first stripe.
Posted by James Pressler at 9:41 AM