For those of you who have not checked the calendar today, it is Friday the 13th. For some people, the only part of this day they are concerned about is the fact that it is the day before the weekend. For others, this is a day full of superstition, bizarre traditions, and a trigger for those with paraskevidekatriaphobia [fear of Friday the 13th]. No matter what side of the divide you might reside, the important part is that this day stands out in the minds of people. And when something stands out, that should be a writer's cue to seize the moment. 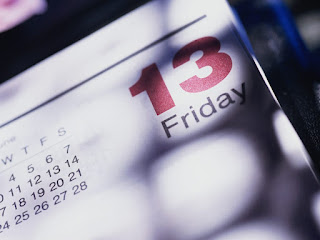 In any piece of writing, the magic happens when some part of the story stands out and the reader takes special notice. It could be the mood of the story, the tone, a unique perspective, or the sudden twist at the end. Maybe it works for the better, maybe the reader doesn't agree with it - that doesn't matter. The point is that it stands out. Just like Friday the 13th, whether or not you believe in its superstition isn't important. It stands apart from all the other days, and we all take notice of it.

When we write, we need to think about what will stand out in the piece we are creating. This goes for everything from the simplest haiku to our full manuscript - it needs to touch upon something that stands out beyond the simple idea of writing stuff. The part that stands out does not need to dominate the page or be the focal point of the piece. However, there should be that one part that anyone who reads it can talk to another reader and say, "What did you think of this idea?" and they will know exactly what the reference is about.

So, enough with the build-up - how do we make this happen? The first part is actually simple: just write whatever piece you want to create. Write it, understand it, and really think about what you are trying to say with those words. In the first draft, there is no need to add that magical part; it's just about understanding what you are creating.

Once you have created something, ask yourself, "What would make this special?" The more you write, the more you will be able to answer this question without pause. However, when you first jump into this idea, you might need to reflect upon it and consider what you really want it to do. Maybe you want the description to set the mood. Maybe you want the character to be truly memorable. Perhaps a catch phrase or gesture that will become that character's signature move. It could be as simple as really nailing that twist at the end to where your readers will bring it up time and time again. Focus on that idea until you know exactly what you want the special part to be.

Then write it into your work.

That last step sounds pretty easy, but that's because the heavy lifting is the step before that. Obsessing over just how to make something stand out can be a brutal, even overwhelming task, but once you figure it out, the writing will just happen. It's surprisingly easy at that point.

The whole point is that the stories and poems we remember have that magical element that comes with Friday the 13th. They stand out because one particular point is truly memorable. And hopefully, it doesn't bring a bunch of bad luck.