Where Does It All End?

As some of my regular readers may know, I spend a fair amount of time on writer boards, scrolling through the posts and collecting different inquiries. Now and then, a particular topic will get some traction or a lot of people will post similar questions, so I make a note of that for further use. Of late, one particular question has been popping up: "How do I end my story?" So let's explore a little into this not-so-simple question. 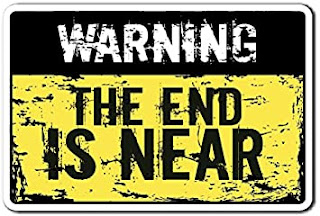 First off - Wow, there is a lot to unpack in that six-word nugget. I think the best approach would be to offer a general answer, then expand on how we rarely write an ending on its own. To cover the first part, our ending should be a concluding moment where we acknowledge how the main character has changed from the beginning, what they have gained/lost from their journey, and also tie up any loose ends that might be on the reader's mind.

Now, about writing the actual ending. If we, as writers, wait until we have told our story then decide to write the ending, we are missing a very important part. There is this natural assumption among some writers that a story is just built in one continuous direction that will inevitably reach its destination and land in a nice, tidy manner. This is analogous to building a bridge just by extending a road over a valley and targeting the other side as the eventual end. Nice thought, but that's not how bridges are made.

To divert into bridge-building a little, the road across the valley is literally the last part that is built. First there is a blueprint laying out the plans - this would be the writer's outline. Then the superstructure is put into place - the writer develops ideas about the characters, the events, the plot arcs and different steps that guide the story. This is the boring part of the writer's journey - figuring out all these steps, but it is just as critical as the joists and supports holding up the bridge. Most drivers only see the road just as most readers only see the story, but what lies underneath is integral to that journey being sound.

When people ask these questions on the various writer's boards, I scroll through the comments section and see what is recommended. Most people who take the constructive route go with what I said in the second paragraph of this post, but not many look at what needs to be done to get there. And in reading works where the end was sort of put together on an ad hoc basis rather than developed and considered from the beginning, it feels quick, hasty, occasionally abrupt and often incomplete.

So, to get back to the original question, I offer the following advice. I ask the writer to think about the character's journey - all its twists, turns, and setbacks - and decide where they want that character to land. What lesson should they have learned? How have they changed? Then look at the story and see if the narrative has taken them on a journey that leads to that point. Usually, if someone doesn't know how to end the story, they don't know the intricacies of the story itself. Therefore the best advice is to know where that story is going before you create it, and if you are already into the story, examine where the journey has gone and where you are happy concluding it. At that point, the end is as natural as placing in the road after the rest of the bridge is finished.

Next stop: How to start the story.