If you will indulge me, I would like to discuss the pros and cons of the writing workshop. While I consider workshops integral to really finding one's writing voice and developing one's skills, this is not to say that there isn't the occasional downside. The upsides are legion - exposure to different styles and skills, being able to think critically about your own work and others, and the input you receive from other members. The writing family that exists within those workshops is a benefit in its own right.

The downside is, of course, losing a member of that family. 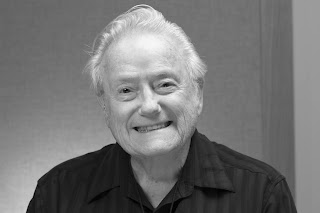 Robert Patrick Brown joined our group in 2015, bringing to it an inspiring attitude and a lifetime's worth of stories that he wanted to commit to paper. It's not like he had never written before - his works had been published in newsletters and other periodicals - but he wanted to up his game, so to speak. Furthermore, he wanted to pursue the biggest goal of all - writing the story of his life.

I think it's worth noting that when he showed up at our workshop with the aspiration of turning his life into a novel, he was seventy-seven years old. And after he read a few of his stories, including life with the Chicago Police Department, his huge family, and indulging in his favorite hobbies, it became apparent that he might need more than one book to tell everyone about who he was.

The part that came through, however, without the need for a manuscript, was that Robert was just as much a teacher as a writer. His work as a teacher's aide was more than evident in his mannerisms, and how he would both engage in critiquing everyone's work but do so in a constructive manner that made people feel like they had genuinely learned something that would benefit them as a writer, and indeed as a person. He never had a negative word for anyone (even if they really deserved it), and raised spirits for everyone around.

That's the difficult part about the writing family - losing members to the ravages of time. Robert's health took a bad turn during (but unrelated to) the COVID epidemic, and it weighed on his every function. In his final days he struggled to complete most tasks, but with the help of his wife, Rita, he did complete a few short stories that will be published posthumously in the group's upcoming anthology, Lost & Found. Indeed, these stories remind us that with the written word, we can live on long after our mortal coil takes its last breath.

A writing group develops a closeness that is akin to family, but they are, like so many other social groups, the family we choose. In that way, the family is better for having embraced them by choice, even when we lose such a valuable member.