Why Be a Writer?

For this blog's first post I went with the bluntly obvious. It was titled, "Starting off as a writer" and it primarily discussed what motivated me to begin writing seriously. I put a lot of thought into that piece before even writing the first word, because such a subject can go in many wild directions. Very few of us have just one reason for writing (I have several others besides what that post explained), and some of us have more motives than we know. So on that note, I decided it would be helpful to expand on those other things as a way of reminded us just why we engage in this mad pursuit. 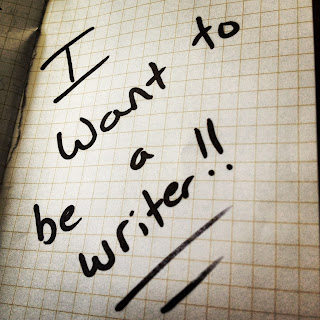 Sometimes it is tough to write. Even when we have the story in our head, there can be a lot of mental or psychological obstacles preventing us from committing those stories into words. Our eyes are transfixed on the computer screen, hands at the keyboard, but our thoughts drag us away from things. We will think, "I wonder if it's windy outside. I should check," or "If I don't play PC Solitaire, who will organize those decks of cards?" When this happens, I turn my thoughts toward what first drew me into the joy and madness of writing.

While it is true that I began taking creative writing seriously in my thirties, it was not where that journey started. In fact, the origins date back to before I could even write. My parents said that even when I was just a few years old, I would find some innocuous item like our dog's chew-toy, give it a name, and start telling stories about its adventures. (Full disclosure: It was just a chew-toy. The sum total of its life's adventures was getting chewed on by our dog.) Some part of my mind wanted to create, to build a world beyond what was there. Was it psychological escapism? A coping mechanism for managing the troubled world I lived in? Who knows/cares? Even before I knew what storytelling was, I wanted to do it.

This may come as a surprise, but I did take creative writing in high school. To be honest, I was horrible at the course. As Fran Lebowitz once said, "The first time I hated writing is when I had to do it." Now, in this class, my urge to write was still there, but this was a course about structure and how to presents things and blah, blah, blah. I just wanted to drag these stories out and make them as perfect as possible. I didn't have the patience to learn about things at that time, and it worked against me. I could've gained a lot from that class, but instead I had to learn those lessons slowly over the next two decades. My bad, and my apologies to Ms. Lester for wasting her time.

What I did learn as a broad-stroke life lesson was that my storytelling was not some urge or impulse, it was a need. Extracting whatever roamed around my mind and committing it to paper somehow fed something I didn't fully understand for many years. It took a life-altering event to wake me up to that idea, but thankfully I had time afterward to act upon it.

So, sometimes when I look at that screen and I can't seem to get things into gear, I ask myself that simple question, "Why Be a Writer?" Even before I have the answer, I start typing the thoughts flashing through my mind. It reminds me in no uncertain terms that it has become a part of me, and I should no longer think about being a writer, because I am a writer.