I recently completed a pretty grueling personal challenge - a 100-mile cycling trip. Anyone who knows me knows I am an avid cyclist, but going that far into the Illinois heartland presents several obstacles. Furthermore, I do not have the advantage of reckless youth to fall back on anymore. In short, this was a considerable challenge for me personally, and completing it was more than just an accomplishment - it checked off a very important box on my long mental list of things I want to do before I am too old to do them. 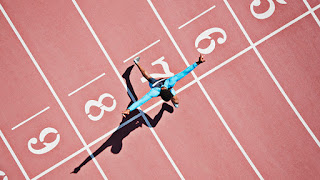 In all fairness, I have several friends who have completed this task on several occasions, with better ride times than me and with less physical exhaustion. They casually call it, "doing a century" and accomplish it periodically over the years. For some people, this would diminish the personal goal of completing such a long ride. However, I have learned that people around me are not the bar I need to measure myself against, for I will always fall short in one way or another. The important part is that I completed it. Period. If they do a century every year, I wish them well and applaud their effort. For me, I am just proud to have made it across the line.

In writing groups, I often think this is the problem beginning writers face: They want to write something great, but how will they ever match up to the Faulkners, Grishams, or Hemingways of writing? It's pretty intimidating to go to a writing group in the back of a library and learn about the rules of writing and literature while literally being surrounded by the words and works of some of the best writers ever. This is where beginning writers let themselves get tripped up by those who are better than them, and they have trouble progressing. They focus on being the best (a fairly high goal) versus being a writer.

I know several people who have run marathons (my knees will not allow me to achieve such a goal). Of all the people I know who ran the Chicago or the Boston marathon, I do not know one who went in expecting to win it. They fastened on their number, lined up, and put all that training to work trying to finish the 26.2-mile run without dying. Their goal was merely to complete the race, perhaps with some mental time they wished to beat, but with no fantasies about winning the race.

When new writers come into a workshop completely intimidated by the mere thought of writing the Great American Novel, I try to ground them to something more immediate and achievable. I start with the little push - write a poem or a short story. Complete it to where they are satisfied, then read it to the group. This gives them the victory of completing a task versus trying to win the game of writing, and completion is so very satisfying. I make sure they attach their name to it and own it as the accomplishment it is. Plenty of people have written poems or stories, and now that person is one of them. It's a victory, and it helps push them forward.

Will they ever write a whole novel? That's up to them. The lesson they learn is that by setting their own goals and targets for advancement, they learn the joy of growing and embrace the sense of accomplishment. They finish their own marathon, they do their century, and nobody can ever take that from them.