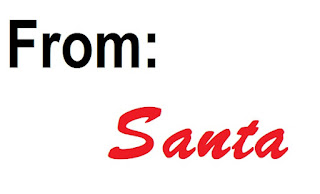 As promised, I took on the challenge presented in my last post. For those who prefer a quick recap rather than reading the entirety of my last entry, it was a simple writing exercise: To write about a holiday memory, focusing on the most minute, intimate detail possible. The idea was to keep away from the broad thoughts about the holidays that can easily overwhelm the spirit of the piece, and hone in on one specific point in order to comb out all the other things and tell one precise story. And, on that note:

I can't tell you if I was five or six years old at the time. For that matter, most of the details from that particular Christmas morning are just a haze of collective holiday experience. All of the usual features were in play, but the one thing that stuck in my memory was the label on the first gift I opened. As I held the festively wrapped box in my hands, I read the label. It said, simply, "To: James. From: Santa." This was no different than the labels on most of my other gifts, and the same thing from past Christmases. However, this time, something connected. At that point, I saw the handwriting (disregarding the fact that it had an uncanny resemblance to my mother's very exacting cursive), and realized that somewhere, at some point, Santa Claus had taken a little time during his schedule to write his name next to mine. He wanted me to know that he, Santa Claus himself, personally chose this gift for me.

It was a moment of connection for me that was hard to explain with my childish mind. I had only met the big guy a few times, and it's not like we talked a lot. I just told him about things I wanted and how I was kind of a good kid, and somehow, he remembered all that and acted upon it. And, not only did he act upon it, but he personally signed it. Santa. He autographed it himself, to let me know it was from him. He wasn't here to see my expression or anything, but he left his mark and now I saw it. And for the first time, I think I made the connection that for whatever gifts I received and the joy I felt, someone was on the other end of that gift, enjoying the act of giving it to me. That changed Christmas for me in some way, and though it took a while for it to really become part of my persona, I think on that day, seeing that name and knowing I was on someone else's mind on that day, I grew up just a little.

There you have it - a focus piece, discussing the sum of the holidays (as I feel about them) from the perspective of the name on the gift label. Such a piece leaves out almost every aspect of my life save for that one point, yet I would wager it describes a part of me more intimately than any other narrative might accomplish. I hope this exercise inspires you to do the same.

Holiday obligations must be attended to, and those will go well beyond December 25th. My next post will be on December 30th, assuming the Christmas celebrating doesn't go horribly wrong. Merry Christmas and Happy Holidays!

Posted by James Pressler at 1:59 PM