I was considering taking today off from posting in recognition of Martin Luther King Jr. Day, but instead I decided that there was something to offer from a brief post discussing speeches. "Speeches?" you might ask. Indeed, speeches. Some of the most memorable quotes in history were from speeches and yes, they were often from pieces written well in advance with painstaking care and forethought. And as with any speech, the way it is written will determine the impact it has on its audience and on generations to come. 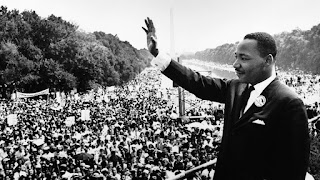 Speechwriting and oratory have become lost arts in these days of soundbites and memes, which is what makes them secret weapons in writing effectively and persuasively. People have forgotten how a well-written speech can bring people to their feet, rising to action. Sweating over one concise, thought-out message can pay off in ways some people no longer realize. The Gettysburg Address - less than 200 words - is one of the most quotable speeches of the 19th century, while most people forgot about the two-hour-long oratory given by another speaker at the same commencement. Lincoln's words moved people. Good speeches do that.

Now, today we will (or should) all hear the famous line from Dr. King's "I Have A Dream" speech. That moving quote, however, was so effective in part because it was part of a very rousing speech. This is what good speechwriting is really about - emphasizing a theme, building upon it, shoring it up through examples and metaphor, applying it to the entire audience, and then packaging everything discussed into one profound message. A good speech should be built like a pyramid - a broad, solid base that narrows as it grows, becoming more firm and grounded as it rises, all approaching one point that will feel inevitable in its conclusion.

Let me offer this. As I said, we all know that soundbite from Dr. King's speech. However, read the words preceding the famous part, and look at how everything builds up to what we all remember. Examine the structure and see why it is such a great example of building to a  point:

"I am not unmindful that some of you have come here out of great trials and tribulations. Some of you have come fresh from narrow jail cells. Some of you have come from areas where your quest for freedom left you battered by the storms of persecution and staggered by the winds of police brutality. You have been the veterans of creative suffering. Continue to work with the faith that unearned suffering is redemptive. Go back to Mississippi, go back to Alabama, go back to South Carolina, go back to Georgia, go back to Louisiana, go back to the slums and ghettos of our Northern cities, knowing that somehow this situation can and will be changed. Let us not wallow in the valley of despair, I say to you today, my friends. So even though we face the difficulties of today and tomorrow, I still have a dream. It is a dream deeply rooted in the American dream. I have a dream that one day this nation will rise up and live out the true meaning of its creed: We hold these truths to be self-evident, that all men are created equal..."

This section starts from a deep, dark place; one of true despair. It emphasizes that point, encompassing the audience in that misery so that they are all of one mind. Then, with one transition, it lifts them all with the message of hope. This is speechwriting at its best. And if you learn this technique as a writer, your message will carry farther and influence your audience more than mere words could ever do.

Posted by James Pressler at 1:33 PM