One of the first things we are taught in any writing class is to focus on description and detail. Beginning writers start off very weak with these, then quickly use them to painful excess. These descriptions and details go from non-existent to annoying to confusing to many other places, but the important part is that we learn to use them effectively. We don’t always need to use them, but we need to develop them as tools so we can bring them out when necessary. 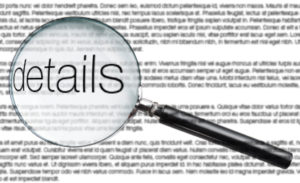 As we progress as writers, we learn there is no one way to use description. William Faulkner used the technique of the compounding sentence to create long, elaborate descriptions – and by long, I mean thirteen-hundred-word sentences – that are surprisingly engaging. F. Scott Fitzgerald worked his way from elaborate discussion to the more efficient descriptions, while Ernest Hemingway went from compact, powerful sentences to more drawn-out discussions of simpler things.

The reason they all became famous is because they started with basic description, learned techniques, then developed styles that quickly became their own, and we are no different. My earlier writing went through all the stages of development, and hopefully has further to go, but I learned a few tricks along the way that really offer variety and depth to any narrative – be it a novel or a simple character sketch.

My favorite is to “show” a personality through a narrative that uses visual cues to describe a personality. This brings the reader into the description because it is not just an explanation of a character’s looks or their manners, but a switching of the senses that creates a visual impression while offering a sketch on the person themselves.

Here’s a description of a character I will call Matt (this isn’t based on anyone named Matt):

“Everyone knew Matt from his eyes; they never stayed still. Even when he faced you, drinking, laughing, joking, those eyes slipped around like vipers, targeting everything from under the shadowy brim of his low-riding hat. Even during the lonely moments, two guys drinking cheap whiskey at the back of an empty chop shop, those eyes explored every angle, every feature, everything but the person before him. Were those eyes constantly searching for hidden secrets that never existed? I believe they tried to escape the reality before him. I knew everything about Matt because every time I looked at him, he never looked back.”

Technically, this is a discussion of why Matt’s appearance is so memorable, but it offers no visual cues about Matt’s appearance. The only thing we know about him is that he has eyes – we know as many details as we know about his hat. The mannerisms, however, create a story about his character. They set a stage to where we can select an adjective or two and make him into anything from a paranoid man to a thug to a scheming monster or maybe a slick con artist. And while the physical description is minimal, we end the scene knowing the character in our mind.

Conversely, being strictly visual can convey a deep understanding of how we want that character to be fleshed out. Visual cues alone are tricky to work with, but active verbs can complement them to elegant effect:

“I could watch the sun play in her hair forever, the blond locks lighting up in a radiant glow. The warmth of the day made her wide smile blossom while her long arms stretched high into the air as if in joyous worship to the heavens. Her light skin never burned; the sun would never be so cruel to such a loyal patron. When the breeze passed she craned her neck forward, leaning into the wind, drinking it in like a healthy serving of nature’s bliss. She embraced days like these with open arms, a willingness to drown in the beauty around her.”

While the visuals are there, the verbs carry a language and tone that provide us with an image of someone truly content. At this point, we do not need to worry about offering other details – through the visual, we have created more than just an image.