Oh Baby, It's Hot Outside

In case you haven't heard, in some places here in the USA, it's hot outside. Real hot. Throughout the media, everyone is telling us that it's hot. Small-talk with strangers now starts off with, "Wow, it's really hot." Headlines can't avoid communicating this simple fact - hot. However, not many of these people take it much further than just saying it's hot outside. They just use that word over and over again - hot, hot, hot. We writers can do better. 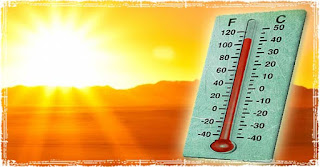 Describing something like heat is usually a direct appeal to a person's sense of temperature. That's the easiest route, so we want to go to the word thermometer - warm, hot, real hot, scorching, broiling, unbearable. Descriptive, but in the long-run, boring. Once everyone uses these words, they lose meaning and impact. A writer needs to go beyond the thermometer.

One area to explore is the response to heat. Description can be cause-effect, and in the reader's mind, that is a two-way relationship. We can talk about what the temperature does without even mentioning heat, and the reader will feel the result:


"Tom left his building and braced himself as the oppressive, humid air met him outside the door. Sweat instantly beaded on his brow as his glasses, cold from the air conditioning inside, fogged up with condensation. His six-block walk to the train station would feel like a few miles on the treadmill, but without a refreshing cool-down in the shower afterward."

The temperature words here are in the cool range, but their reactivity brings out the heat of the moment without actually using that term. All the discussion appeals to how the character reacts, and readers can relate to that even more than just how hot it was.

Of course, sensory appeal works as well, particularly when we go beyond the obvious sense of touch. Think of looking down a country road on a summer's day, and how the fields on the horizon ripple and waver in the distance. It's a bit of a cliche, but it represents a sensory description that shows the heat without saying it. Let's go back to Tom walking to the train:


"The flow of rush-hour pedestrians had slowed to a crawl, the draining weight of the air pressing down shoulders, turning breathing into panting. Elegant ties were loosened, pressed sleeves rolled up, collars unbuttoned, the nicest wardrobes now sweat-soaked and rearranged into survival gear. People slowly walking past the fountain outside City Hall paused to watch children playing in the water's spray. It was the wild, free-spirited joy of youth, and adults found refreshment in the sight of people just enjoying the summer's freedoms."

No use of the word heat here. The image of the mass of melting commuters is all that is necessary. The blending of exhaustion and joy offers more dimension to the scene, allowing it to be a complex palette of emotions that doesn't maintain that one note of heat. However, if that one note is preferred, that fountain part could still describe the children, just focusing not on their joy but the quiet jealousy of the staggering commuters.

When we, as writers, encounter a familiar scene, we have a choice to make. We can go to our home-run swing and say, "It was hot. Damn hot. Really damn hot," and really just drive that point home. Our other option is to play upon some angle, some theme that brings out more from the scene.

Simple exercise: The next time you go out and have an opportunity to make some small talk - the gas station, an elevator, wherever - think about how to bring up the weather without hitting on the temperature. "When it's like this, it's tough to breathe." "Days like this make a cold one so much better." "Guess who's not mowing his lawn today?" Get a feel for the variety that is possible, and turn it toward your writing.

Oh - be careful too. It's real hot outside.
Posted by James Pressler at 12:42 PM