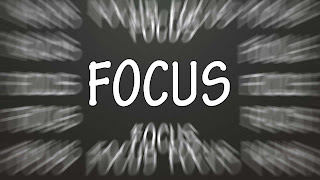 First and foremost, this is about focus. During a panic attack, sensory input is overwhelming. Every sense wrestles for dominance, every sight and sound taking on a presence of its own. In writing, this is when the author tries to explain everything in one big flurry of words: a character's wardrobe and hairstyle, their car, their personality, where they live - you get the point. Readers will lose track of all these little details flying around, and few things actually stick. Chaotic explanations and descriptions are the literary version of a panic attack, and the best remedy is similar.

The most important part of remedying a panic attack is focus - cutting off the massive sensory input and turning attention to a limited number of obvious points. Our sense of sight is an obvious approach, so turning the mind toward a few items limits the flood of chaos. In writing, we don't need to describe every stitch of clothing if we can offer one visual cue that creates the whole image - a department head's business suit and tie as clean and crisp as the company he works for, or everything a person wears looking like its made out of hemp. One description, one focus, and our writing is less chaotic.

The next part of control is the narrowing element. Each step in bringing down a panic attack is narrowing that focus; five items becomes four, then three, and so on. When we first write about something, we can offer a broader description, but each time it returns, we narrow that focus toward the crucial elements. As we continue to discuss the department head in the paragraph above, we focus on the starched edges of his hard collar or the retentively tight Windsor knot of his tie. Those define the person, and even the mention of that cue describes the entire person. And, if a later scene points out a wrinkle in that suit or a crease in that shirt, well, it sets off alarms with the reader. That one mention, with proper focus, dominates an entire scene.

There is also another note about focus that the panic-attack example might not reveal so obviously. As we go through the sensory roll call, we go from the very obvious world of sight and sound to the more intimate, internal world of subjectivity and perception. In short, the focus goes from external to internal. As the world becomes more intimate, the writer brings the reader into the world, beyond the red, green, and blue and into the senses that trigger emotions and memories. At this point, the reader is translating the words directly into how they understand the world. They are bonding in a way that engages them with the writing. For the writer - mission accomplished.

I know plenty of people who write amazing descriptions. Most of the time, two people will walk away from those pieces with a different idea of what they just read, but they will have the same emotional experience. This is good writing. This control of the reader's perception through focused description is an amazing thing, just like seeing someone bring a panic attack under control, and the end result is often an amazing sense of connection afterward.
Posted by James Pressler at 11:26 AM