Blurring the Lines Between Good and Bad

Picture in your mind a villain. Not a specific one - let Boris Karloff and Alan Rickman rest. In your mind, make up the image of someone truly villainous. Male or female, human or otherwise - the only prerequisite is that they will be the antagonist to a story. Now once you have that together, focus on the stand-out traits and figure out a way to describe them in the story. Find some words that get the point across in a way that pleases you, and really puts that bad person on the page. (There's a purpose to this.) 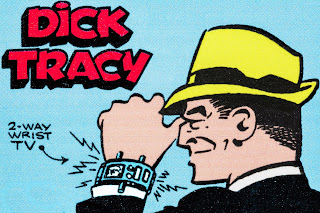 Since this is a villain, it would not be surprising if all the descriptors had some kind of evil connotation or sinister overtone. Were the colors dark and shadowy, or perhaps blood-red? The definition of their face - strong, defined lines; angular features and distinct contrasts? Are there scars or facial hair? Perhaps a deformity or misshapen features that call to the reader for their unusual presentation. These are all perfectly acceptable villain features - nothing wrong here. However, what happens when we sort through those? Certain features are more typical of villains, but some are more appropriate for strong characters - good or bad.

The old Dick Tracy comics (and particularly the movies in the 1930s and 1940s) became a classic display of good versus evil as portrayed through character description. The good guys might not have been pretty, but they were presented with clear, distinct lines and consistent elements. They became the norm for the standards presented in Dick Tracy's world. It might be physically impossible to live with a jaw as well-cornered as Tracy's, but that squared jaw represented a very attractive trait and helped define him as a great guy.

The bad guys, however, were all different. They were deformed, misfit creations that didn't blend into the world but rather stood out as aberrations. They were scarred, misshapen entities capable of doing anything that society rejected because their appearance was against all social norms. They were the prototypical definition of the enemy, in every sense.

So far, nothing new here. However, what happens when we take a few traits of bad guys and give them to our hero? What if the villain has some heroic traits or pleasant features? Now we have gone beyond pulp comics and ventured into the realm of complex storytelling. A hero with a pronounced facial scar not only suggests a rich backstory, but the symbol also implies internal conflict and perhaps tragedy. Our hero wears the mark usually saved for villains, and perhaps this symbolizes a darker nature, or a weakness for doing the wrong thing. Maybe the hero is at risk of succumbing to darker influences, and that temptation will test them later in the story. It's not just a deformity at that point - it's a signal to the reader about a lot under the surface.

Oh, and pity the reader that tries to hate a villain with redeeming traits. A beautiful villain might not be so bad, but what if that antagonist also takes care of their sick mother? What if they have a moral code to follow? If our villain carries traits that aren't so villain-y, the reader becomes conflicted as well. The reader has to weigh the situation, and make tough choices. If the reader is doing that, I guarantee the reader is fully invested in your story.

The next time you draw the lines for your protagonist and antagonist, try smudging things a little. That wouldn't fly in Dick Tracy comics, but in narratives, it makes characters stand out.