I've had the wonderful experience of a friend telling me, "I met (a certain actor) last week... and he is nothing like the characters he plays!" Of course, I was happy for my friend and that celebrity coup. However, a part of my brain had to stop and catch its breath. I thought, "You do know that (a certain actor) is actually an entirely different entity that the characters he plays, yes? The characters are written, while (a certain actor) exists entirely on his own, and often makes his own decisions on his words, mannerisms, wardrobe, and life choices." But then I thought how easy it is for us to blend together the art and the artist, as unfair as that may be. 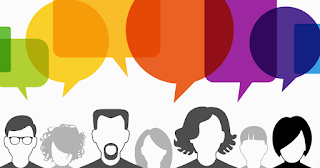 On more than one occasion, a newcomer to my workshop will hear one of my pieces and later, say, "Your writing is different than you." Sometimes, that's a compliment; other times not. I look at it from the point of view that if I can write in a voice or style other than what I consider my natural way, then that's a good thing. The only real question should be whether that's how I want things to come out.

Being able to create pieces in different styles and with different voices is a healthy writing goal - this allows the writer the liberty of deciding the best way to deliver any message they want with the story, and convey it effectively. These should be like second languages or voice impersonations, where the creator of the piece vanishes and that alternate approach dominates the scene. We see that all the time in movies, particularly when (a certain actor) steps outside their usual good-guy role to portray someone who is morally dubious or downright bad. We should pursue the same thing as writers.

Consider a story centered around something very solemn - a funeral, perhaps. The character has to deliver a eulogy for a loved one, but has a lot of pent-up frustrations that need to be expressed. An emotionally volatile subject, easy to turn into something with real impact. It would be easy to write this in a very sobering, tough-life voice, making everything as dreary as possible and filling it with one frustrating revelation after another, but how can we change the product while retaining the story? What does another voice sound like?

Ever get to sit through a bad wedding toast? I mean really bad - like the drunken uncle making rude jokes and offering comments about the newlyweds so cringeworthy that you want to hide under the table? Where you actually feel embarrassed for the bride and groom? Where later, people still talk about the speech like a support group for Post-Traumatic Toast Syndrome? Gather that experience, collect the voice of that experience and bring it to our eulogy story.

We take all the mood of our happy wedding reception and move it to the eulogy. The funeral doesn't have to become a happy affair, but instead of attention turned toward tears and handkerchiefs, descriptions focus more on everyone wearing their nicest attire to send off the deceased in the respectable manner they deserved. Then here comes the speaker to give his eulogy, mourners anticipating the fond memories to be shared that will lift their spirits and bring closure to the moment. Then the eulogy begins with all the errors and gaffes of that same drunken uncle, and all those moods shift. The voice and mood of the story is not that of a funeral, it's of the wedding, and the effect, while distressing, gives a different result.

I always give consideration to the voice I want to use for a story before I even put a word to the page. And like any good writer, I give myself the liberty to change it afterward; after all, sometimes we all have those moments when we know something would work better; when (a certain actor) just isn't right for the part as written. Fortunately, we have the liberty to rewrite the thing as we wish, and we don't have to recast the scene.