Most everyone I know is familiar with that big red ball. Definitely everyone I went to school with knows it. We have, at some time, kicked that ball, thrown it at our friends, dodged it as it whizzed by, caught it, or, as was often my case, felt it bounce off my body and leave a white-hot sting for a few seconds. (Back then I bruised like a peach, so there were other marks too). And anyone in the same room as that ball knows its distinctive bouncing sound with that rubbery reverb that never quite dies down like the ringing in your ears after someone beans you. The mere sight of that image now can evoke that sound and even that decades-old stinging sensation like a school version of PTSD. 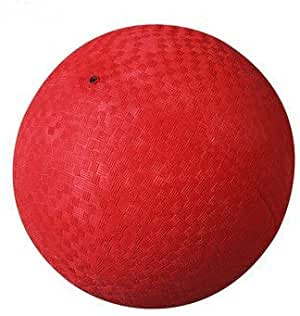 That image evokes sound and feeling not because those feelings are unique but because their association is universal (or at least nationally common). Maybe this is lost on my Australian friends, but for those USA folk, the image is a pizza with everything, something for all the senses. Spending a little time discovering some of these common things is priceless when it comes to writing descriptive similes that really bring in the senses.

What about the sound of ice cubes tinkling around a chilled glass? That summertime cannonball splash from a kid jumping into a pool? Tires sliding across wet pavement on a dark, empty road? These sound descriptions are clear and distinct, and create a great mental visual for the reader, but did you notice something else? Each sound incorporated a seemingly meaningless but actually important secondary sensory cue. The sound of ice cubes doesn't change much if the glass is chilled or not, but that added sense of touch solidifies our understanding of the sound. Now we can see the frost on the glass or the condensation dripping down the side, even when the attention is on the sound. Does a jump in the pool sound different in summer? Do tires skid louder at night? No - but the sound stands out more.

Let's use that jump-into-the-pool one some more, and start exploring. It can be a splash if we want, or it can be that great ker-plunk sound of the kid cannonballing into the water, followed by the water clapping together behind the child. If I describe that splash with a little bit of variation in the action, the sound changes. Depending on how we close the sentence, the start of the sentences changes shape. Listen to all these different sounds that happen even though all the sentences start the same:

Each sentence starts the reader from the same place, then a simile changes the scene and brings other concepts into the image, all while engaging the reader. It's just a sound, right? Not anymore. The senses blend with the imagination, and your description gains a new dimension. It takes on a new quality. It gains life.

Look back at that dodge ball. My guess - you're thinking about its sound again. That's what vivid description does.
Posted by James Pressler at 9:11 AM