Reality Has Its Limits

Reality – as it turns out, I am a big fan. I like most everything about the real world, and that’s why I include it in my writing – even in fiction. As I mentioned in my last posts, reality is an important ingredient in fiction because it tethers the wildest stories to something the reader can relate to. However, there is always such a thing as too much reality. 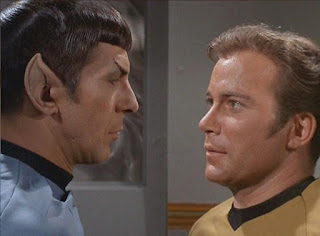 I promised in my last post that this one will be zombie-free, so I will keep my word. That being said, let’s take on the most fictitious world we can think of. Be it post-apocalyptic, the far future, or a world of swords and sorcery, there needs to be an underlying foundation the reader can latch on to. The further the fiction goes from the world we are in now, the more important it is to establish a lifeline to the known world. If cannibalism is prevalent and accepted in the post-apocalyptic world, the reader is going to need something in the main character to connect with or they will put down that story real fast.

Let’s take a look at the original Star Trek series – travel back to the 1960s before all those terms they made up were part of the English lexicon. This was a world only truly known to Gene Roddenberry: a place where people of all races and colors were equals on the Enterprise, where different species served the same captain, and all the animosities of the Cold War world had dissolved into the harmony of the Federation. That’s a lot of world to offer, but how much did Roddenberry the storyteller know versus the amount he told?

The magic of Roddenberry’s storytelling was offering the parts of the world that explained the themes and environments he felt were most important. His idea of a unified Earth was critical to providing a different and positive view of the future, but the show did not labor on just how Earth reached that point. Roddenberry knew all the steps, but all the viewers needed to know is that humanity had finally reached global peace and was now exploring space without the hostility so prevalent in the real world. Was the Federation’s electoral system important? The shift in the global economy? Honestly, the viewer never cared as long as the story was compelling.

One of the biggest mistakes writers make is losing the balance between how much world they create versus how much they offer. For plenty of creative types, the idea of making a whole world around a fictitious world is an adventure in itself, and well worth taking on. J. R. R. Tolkien created the Land of Middle Earth replete with so much history even he couldn’t keep track of it, but it was definitely his passion. However, that passion comes with an overwhelming urge to offer every detail as part of the storytelling. At that point, the problems start.

As complex and beautiful as the newly-created world might be, a writer’s objective is still to tell a story and not explain a world. The job is to move a character along the path of adventure, building the tension as the risks grow, the challenges become more difficult, and the objective finally comes into reach. With all that storytelling, a discussion of the king’s succession or the courting habits of elves might get in the way of the actual adventure. (Okay, the king thing was kind of important in the Lord of the Rings trilogy, but that’s another story.)

In the end, it’s all about balance, and it’s something we should always keep in mind. We need to know how much is necessary to tell the story, how much more will give the reader a world they can connect to, and how much the writer just needs to know in order to guide the characters along.

And if a few zombies walk in, I’d appreciate it.