It seems every day of the year now has too many anniversaries and commemorations to keep track of. Today, for example, covers the spectrum from the anniversary of the beginning of the Revolutionary War to National Garlic Day, and there are many other points in between that I could recognize as well. However, I am using this day as a prequel to another big event that is actually relevant to this blog, and that is World Book Day. This Friday, April 23rd, is the recognition of the book (apologies to my UK and Irish friends who celebrate this in March), and I thought I would offer a little prompt in my Monday post as to build some momentum to Friday's celebration. 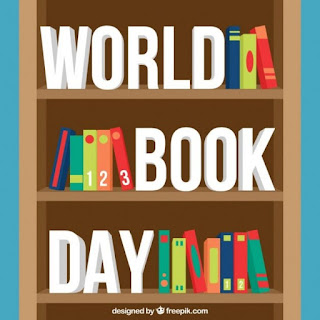 On that note, I am going to recommend that, in recognition of World Book Day, everyone write a book. Sounds daunting? Indeed. However, I am not suggesting we do it all at once, or even try to cram it in between now and Friday. Rather, I am just trying to move people to write some of the basic infrastructure needed to build out the framework for the book. Without these, you won't write much of anything worth talking about, so let's just go step by step.

In as few words as possible, what is the theme of your book? Nothing elaborate here, just trying to set the foundation for this work. It can be something as simple as "redemption" or "reconciling with the past." (The only simple answer that is unacceptable is "growth" because every character should grow in some manner during their story, so that is kind of assumed.) "Taking on adversity" or even a detailed one such as "my battle against cancer" will be fine - just as long as it covers something that will be found on every page and that every character will somehow contribute to or detract from.

Who is your main character and what is their connection to the theme? No need for much here, just finding the lead character and reminding us why they are so important in relation to the theme. If the theme is redemption, why is this character so deeply tied to this pursuit? Are they damned? Beyond hope? What makes their battle greater than the usual struggle for redemption? A book about a battle against cancer should have a character heavily invested in living (and showing the reader how it's more than a story of trying not to die).

What will be the character's long-term obstacles? This, in short, is where we start finding out about the story's antagonists and the conflict potential. Antagonists don't always have to be people sent to oppose our hero, they just need to be points of passive or active resistance. Per our earlier example, cancer itself is a long-term antagonist, but other obstructions can be financial ones, or even fighting our own limitations. The important part about the obstacles is that they should also relate to the theme, and not just be random things that get in the way. A bad guy is fun, but a bad guy who has a long-time connection to the main character is far more entertaining.

That's the basic infrastructure for a book, and while it isn't a lot of words, developing something where those three points are very much woven together creates a very strong foundation. Also, notice how I did not include a discussion of genre at this stage. At its core, a story is not about genre, so let's not worry about that. The root discussion should be one of theme, characters, and conflict potential. Just spend the next few days putting those together and thinking about their interactions.

Then, come World Book Day on Friday, we'll sit down and write a book.