It's a terrible feeling - and yes, it happens to us all at one point or another. We know the story we want to write. We know the characters. We know the means and motivations, we know the subplots and how they weave into the main arc. We know the twists and turns - we know everything we need to know and then some. Fully armed with every literary weapon at our disposal, we sit down to write our story. And then... 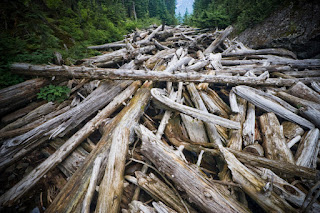 For reasons we can't even explain, that first scene, those opening lines are nowhere to be found. We want to start the story but the story doesn't want to start. Maybe we've had a busy day and we're kind of tired, or there's a lot of things on our mind, but that first spark of inspiration isn't igniting what should be a bonfire of literary creation. We stare at the blank page, all ready to pour every word onto it, but we get hung up on that first line. Why?

First, let me put a little daylight between this condition and writer's block. That tragic situation known as writer's block is similar, but it's usually when our creativity just isn't flowing and the words aren't happening whatsoever. The condition I am referring to is more of a logjam of creativity - so much ready to pour out that it seems to choke on its own enthusiasm. A creative destruction, if you will. Fortunately, there's a remedy for this as well.

Sometimes when we get logjammed, it's not for lack of creativity but rather due to high expectations. At times of peak creativity, we also create this belief that our creation must be its most awesome as well. The myth is that when we create in volume we also create quality proportionate to it. This is a high bar to clear, and frankly, it shouldn't be the expectation for any first draft. When I get hit by this, I deliberately start the piece with just any opening line or situation I want - here are some classic clichés people often use to start a story:

Why do I start with these if I call them cliché? Because they get me to start creating. When I type that beginning, I give myself a mental Post-It note that this will need something better, but not now. No sense in worrying about the opening line of a first draft, because it won't be the last draft. The point is I get moving and gain some inertia. My creativity starts to break through, I make my way to the first conversation, an inciting event, the call to action, and I am off and running. Problem solved, creativity flowing just fine.

In short, don't hold your first draft to some high standard or you will never be able to complete a project. There will come a time for refining everything, including that horrible first line, but now is not that time. Just start writing, and then keep on writing. The creativity will take care of the rest.