"How Much Should I Write?"

It may sound like an odd question, but I hear this a lot. A number of writers, particularly those just getting into the craft, want some guidelines for how long a story should be, or a chapter, or a poem. This is understandable for those starting off - it's tough to jump into something new, and getting a little structure into your brain first might make things easier. However, for some things, the structure isn't actually available in the formal sense, so from that point we have to improv. 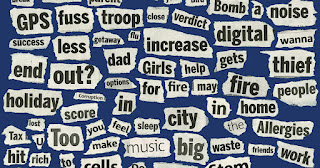 So, like with any good bit of improv, let's learn a few basics. First, don't worry about how many pages something should be, worry about the word count. Pages can vary depending on the font, point size, margins, etc., but words are words. My first manuscript was over 400 pages, but that was in 12-pt Courier with double-spaced lines. That means nothing when it gets converted to a book or whatever. Focus on word count, and let the rest just happen.

Second, there are a few rules of thumb to work with. Someone asked if their novel can be 30,000 words long. Well, a story can be that long, but usually that qualifies as a novella. Novels start at about 40-50,000 words and go from there. However, this is incidental to the larger concern - how long do you want your story to be? How much story do you want to tell? Don't let a word count constrain what you want to say. Say something, tell a story, and then see how  big it is afterward.

I have been asked how long a chapter should be. I try to not sound like a smartass when I say that a chapter should be exactly one chapter long and no more. Some authors go with three or four immense chapters, some go with many smaller chapters, and plenty of people blend the two. The rule I usually follow is that a proper chapter should relate to the reader one particular phase of the story, beginning and ending at natural pauses in the story, and telling a part that can be described in one sentence - usually that is the chapter title. Now, chapter titles have kind of fallen out of fashion lately, and that's fine. However, as a writer, you should still feel like saying, "This chapter is where are hero set out on his mission and hits the first obstacle," or, "This chapter introduces the characters who will bring about the dramatic plot twist later." Nice, packaged assessments of what that should do. The length will determine itself.

As you write, you will find a natural rhythm to where you do your best work and how many words you need to communicate an idea. For me, short stories are in the 1,000-2,000 word range, though more complex ideas have hit 7,500 words. In my novels, chapters hit the 2,500-3000 word level because I feel that keeps the story moving along and lets the reader catch their breath now and then (though I often close with a teaser so they want to read just one more chapter before they go to bed). And my haiku poems are about 8-10 words, but those follow some other rules.

So, to answer the question, "How much should I write?" I would say to write exactly the amount you need to get the message out. If it's a short story, that's fine. If it expands to a novel, so be it. Let the story be your guide rather than some arbitrary number.