An Old-Fashioned Lesson in Showing vs. Telling

During my long stretches of carbohydrate-induced immobility thanks to the Thanksgiving feasting, I got to do things that required very little energy - napping, watching football, napping, calling friends and family, napping, and listening to the radio. It's that last point I want to focus on, because there are some delicious tidbits to be taken from such an antiquated medium. After all, when radio brought storytelling into the homes of the masses, it did so not just with the art and technique of the story-teller, but with the tricks used by a story-shower. As writers, we can learn from this. 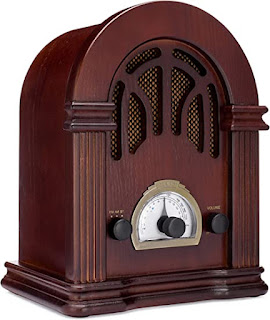 Just so you know, I used the word radio deliberately to not confuse it with more complex stereo systems, high-quality reception and feel-like-you're-there sound definition. Back during the Golden Age of Radio, broadcasters knew that their audiences were gathered around a one-speaker receiver, struggling to hear their shows if reception was bad, listening over background noise and digging in their heels to listen to The Shadow. No high-end receivers, no noise-cancelling headphones - broadcasters had one shot to get the message across, so radio developed techniques that played on grabbing the audience's attention. The biggest one was showing a story - quite the stunt over a medium of sound.

How does a radio program show the story? In the exact way a writer should - by demonstrating the actions around them rather than narrating them. Often (though not always), radio shows were done in the first person, with only occasional the occasional voice-over to switch between scenes. There was often no narration, which forced the show writers to describe things through the characters' experiences, usually by interacting with those things in the scene that were important. Murder-mysteries would turn their eye for detail onto the key pieces of evidence, and spare the listeners the descriptions of the rooms, the property, etc. The listener became drawn to the main elements in the same way the main characters were, and captured by the mood of the moment.

Ah yes, mood. We all know the standard bag of tricks used in TV and movies to create an intense mood, and most of them are visual. Well, those tools didn't help on the radio, so these shows appealed to sound. However, it wasn't just sound effects (which were often ingenious and masterful in their creation), but music and vocal inflections that created their own environment. Writers need to focus on this kind of sensory appeal - not just describing, say, a foggy night on the wharf, but creating the call of a distant foghorn, the sound of waves lapping against the pylons of the dock. Writing a moody scene should be immersive, so much so that it surrounds the reader to where they are no longer reading a book on their couch, but feeling the chill of the damp air rolling in from the bay.

When you write about a scene, go beyond the visual. Get into those other senses that don't get a lot of attention in the movies but move you as a person. Close your eyes, think about the various elements that move you, and put those into your writing. Have the characters feel those feelings, sense those experiences, and relate their responses. Show us exactly how the scene moves them and how the mood affects them.

And maybe, if you get the time, listen to some old-time radio shows and experience how it was done when visuals were not an option.