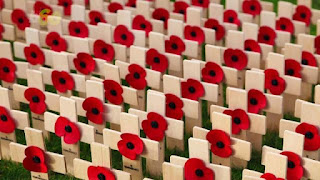 The poem I will offer as an example is, "In Flanders Field" by John McCrae. It was written in 1915 after the second battle of Ypres, supposedly after the death of the poet's friend. It quickly became synonymous with World War One and Veteran's Day, and even though this holiday is meant to recognize all veterans, living and deceased, this poem became intrinsically tied with today due to its birth in the War To End All Wars, despite it being specifically a requiem for the fallen soldiers.

In Flanders Fields - by John McCrae

In Flanders fields the poppies blow
Between the crosses, row on row,
That mark our place; and in the sky
The larks, still bravely singing, fly
Scarce heard amid the guns below.

We are the Dead. Short days ago
We lived, felt dawn, saw sunset glow,
Loved and were loved, and now we lie,
In Flanders fields.

Take up our quarrel with the foe:
To you from failing hands we throw
The torch; be yours to hold it high.
If ye break faith with us who die
We shall not sleep, though poppies grow
In Flanders fields.

This haunting poem is very simple in its construction, yet pulls some clever tricks out to make it memorable. The first five-line stanza uses a rhyme scheme of AABBA - the first, second, and fifth lines rhyme with each other, and the third and fourth lines pair up as well - much like a limerick. This sets a pace that the reader mentally notes. Then in the second stanza, the rhyme scheme is again used, but it is abruptly cut short - like a soldier's life - closing instead with, "In Flanders fields" to mark the end of the stanza and the life. The third stanza goes back to the AABBA scheme and lets it complete itself, suggesting life goes on, but still closes with the Flanders field line, to remind us that those soldiers are still there and will be forevermore. This use of pattern (and breaking of pattern) moves the reader even though they do not know it.

The other part to note is the three stanzas are structured in a manner that gets across a strong point: Setting, impact, message. The first stanza describes the burial site during wartime in five lines, and the reader gets all the established information. Then the impact - soldiers experiencing human things, relatable feelings, all cut short by war. Then there's the message - to carry forth and honor those who fell in the field by never forgetting their loss. If the impact part is strong, the message section works very well because the reader has been set up for it.

This three-part structure of setting, impact, message doesn't have to be used just in poems. This is the foundation for short stories, essays, and most any parable meant to communicate valuable information to future generations. The persuasive argument will always establish the frame of context, show cause and effect, then connect the concluding message to it, whether in three stanzas, three paragraphs, or three chapters. And it works every time.

So on that note, I hope this helps you recognize the power that can come from poetry, and maybe you can recognize how messages can be delivered in high-impact ways. And speaking of recognition, go out and recognize a veteran's efforts today. It's the least we can do.

Posted by James Pressler at 1:14 PM