I've written a number of posts about efficient writing - making sure that each sentence, each word stays to the point and doesn't wander from the purpose of that particular piece. If you are describing a scene, include the important elements and leave out the parts that won't contribute to the story. When a character appears in a scene, don't labor on the details of the size of their ears, their thin eyebrows, or the pointiness of their chin if these things aren't integral to the story. I have made efforts to emphasize writing parts that offer meaning and value.

Then the hate mail started. 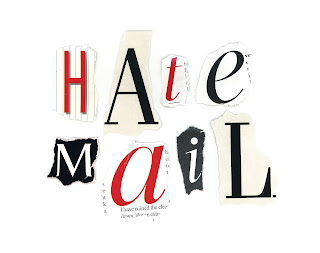 "Hate mail" might be a little too harsh a term, but the emails were rather severe. I received a lot of choice criticism from writers who loved to paint a picture with their words, and how they admired Elizabethan-era authors who lavished descriptions upon their readers that created worlds unto themselves. For me to suggest an economy of writing to create a mood was, well, stingy. These writers insisted on letting things flow.

-- First, many authors in the 19th century were paid by the word, so they piled them on. They went after those extra words like shrimp at a salad bar, grabbing as many as they could. In this regard, excess was merely excess.
-- More importantly, the actual wordsmiths of the era used every word to heighten the mood, not just paint a picture. Merely creating a scene with long, drawn-out or extravagant sentences full of description but devoid of function in the story is considered purple prose, a notable taboo in writing. If each word contributes to a greater theme, it's valuable literary nourishment for the reader. If it just builds up the sentence then fades away, it is little more than empty calories.


"It was a dark and stormy night; the rain fell in torrents, except at occasional intervals, when it was checked by a violent gust of wind which swept up the streets (for it is in London that our scene lies), rattling along the housetops, and fiercely agitating the scanty flame of the lamps that struggled against the darkness."

This sentence is evocative of a number of things, mostly a stormy London night. However, it uses a lot of extra words to basically say what was covered in the first seven words. Every word after the semicolon just reinforces what we already know, without contributing to some larger theme. And considering this is the opening of a novel, it is particularly weak because the only part of the story we know is location - London. A lot of words, very little sustenance.

If you write horror, make sure that every descriptive word contributes to that creepy mood that should envelop your story. For romance, love should be like an intoxicant filling the scenes. Gritty thrillers should have tension in every sentence possible. If your words satisfy that demand, use as many as you want. If not, why use them at all?
Posted by James Pressler at 10:39 AM