I wish I knew who coined the phrase that is the title of this post, but unfortunately I have only hit dead ends in the search for a source. That all being said, I thought it would be worth it to briefly discuss just what this means to me as a writer, and how it has develops my process. 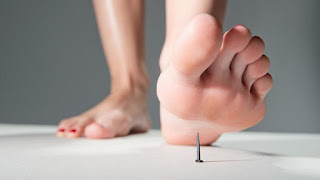 One of the posts I got a lot of personal feedback from (and someone in fact commented using the phrase I am now using as a title) was an early piece called, "Yes, it hurts." This post was a discussion about writing about the loss of a good friend, and how it helped me grow as a writer. Now, some people also told me that they were not in a space where they could face up to writing about their personal traumas. For those people, and for writers in general, there is a way around this.

For those who say they're not ready to write about the tragedies in their life, that's okay. The experience can be exhausting, and dig up a lot of unexpected things. I was glad that I wrote that piece about my friend in a secluded place, because I cried nonstop as I processed the feelings through my words. What I did learn after that experience is that sometimes, projecting those feelings through an alter-ego can take some of the sting out of the feelings.

On that note, let me introduce you to Tom.

Tom - aka Tomas Jurick - is the character who represents my alter ego. Not surprisingly, he is about my size, has the same issues with his weight and his hair, and goes through the highs and lows and life with the usual amount of errors and missteps. The biggest difference is that the major tragedies in his life are presented with full frontal detail, not obscured by that waxy patina we tend to put on memories. When an event in his life occurs, it is viewed from the moment it happened, and not through the hazy, emotionally sterilized fog from a man in his early fifties.

Now, as a writer, I feel sorry for Tom because when I write a story to process a difficult time in my life, I know poor Tom will take the beating. It's Tom who buried his friends, lost his parents, had relationship after relationship blow up in his face, and so on. He's also make one stupid mistake after another, has a long scroll of bad decisions in his life, and plenty of stories about things that seemed like a good idea at the time but turned out to be embarrassing fails. However, I also know Tom is willing to take it because he's just an alter ego, and he will gladly take the beatings that somehow I am not willing to face myself.

As a technique, maintaining an alter ego is a good tool when we use our writing to process grief and trauma. The only caveat I would offer is that sometimes we develop a dependency on the alter ego as a way of avoiding making an experience very personal and therefore intimate. However, I believe it serves a great purpose in developing our skills, and is always worth a try.

And if anyone knows who coined the title of this piece, I would really love to know. So would Tom.

Posted by James Pressler at 2:31 PM