Four Simple Things Everyone Can Create

There's a little saying that comes to mind now and then, and lately it's been crashing around my brain for no apparent reason. Therefore, I have decided the best way to calm it down is to give the saying a little attention, put the spotlight on it, and hopefully, the world between my ears settles down after that.

"Everyone has within them a painting, a poem, a story, and a song, each truly telling the world about them." 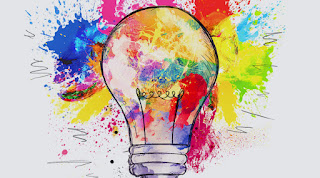 Now some people quickly jump in and say, "A story? I've got tons of stories!" Great, but that's not the point. The emphasis on this saying should focus on everyone. Creative types have already proven their ability to create - the hook is that even those people who do not think themselves creative still have at least one of each of these lurking in their brain. Even the most button-down, uptight, belt-and-suspenders person can create a poem that reveals them. Someone as dry and bland as unbuttered toast has a song waiting to be sung. And, as a former economic analyst, I can attest that even the most analytical, left-brained corporate wonk has these things too. They just require prompting and practice to get them out.

Now, some of my readers are already having doubts - I can hear the skepticism; it's palpable even as I type. I believe that's fear talking rather than the desire to do something new. Most of us who have never painted will naturally imagine our first creation being some hideous, first-grader fingerpainting-gone-wrong nightmare and think, "I knew I couldn't do this!" That's the fear talking. Our first painting, poem, story or song is bound to be this second-hand Frankenstein's monster of creation, but that is hardly the end of the journey. That's the first step to something that can even surprise yourself.

I can also hear the doubts among some of my deeply creative followers. "I told you I'm a writer, but I can't do poems!" "I don't know music, I'm not that kind of artist!" "Painting? I wouldn't even know where to start. I just do words." There are plenty more of those that creative types are willing to produce, all in the name of defending their turf in the creative space while staying away from the scary shadowlands of unexplored territory.

To all these people I offer this strategically worded response. "Blah, blah, blah, whatever. Just try it."

Here's a little secret that might push everyone to at least take a stab at trying these four simple things. While I am a writer, and my occasional poem is public information, I also have a sketchbook that I don't show many people. Within its pages are faces, still-life drawings, and things that are not presentable to the critical public light. I have that painting in there, I just haven't made it yet.

I also have my guitar and piano, both of which I have not mastered or even developed any skill with, but sometimes I take a few strums or run a few scales just to set that part of my brain in motion. I am sure the person delivering my Amazon stuff has occasionally heard my practicing through the door and quickly walked away, but that's okay. I am just looking for my song.

I do not expect to have an exhibit at the Art Institute any time soon, and The Billboard Top 100 does not need to worry about misspelling my name. That's not the point. I poke those places in my brain to wake up different sources of creativity and see what shows up. And I know that if I keep on doing it, something will click and the creative in me will be the better for it.