The Economics of Description

As someone born and raised in and around Chicago, I have a certain connection to the big city and all it has to offer. Thanks to my decades of living and working in the Loop, I feel I can very passionately describe it in any and all of my Chicago-based stories. Whether it's talking about the windy canyons that serve as streets, the river view, or that definitive skyline, I can offer a few paragraphs about it at will. 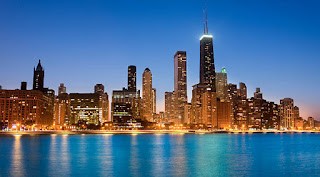 Truth of the matter, however, is that I don't do that in most of my stories - especially the Chicago-based ones. Why I often pass it over is not out of some irony or negligence or literary spite, but rather for a simple reason - the city isn't that important as far as the story is concerned. As much as I love writing about all things Chicago, sometimes it's better to save those words and descriptions for the things that actually move the story along.

This all goes toward being economical with our words. This might not seem like an obvious thing to do, especially since beginning writers are constantly told about the importance of description, filling in the scene and using words to make things come to life. However, beginners are taught to use description in order to learn how to use that tool - when to use that tool comes later, followed by learning if they should use it at all.

Take, for example, the face of your main character. Besides describing the basic driver's license features - eye and hair color - there are details like mouth shape, nose size, ears, hair style, freckles, birthmarks, scars, etc. The list is quite huge, and we could easily do a long-winded paragraph just describing the finer points of our main character's appearance. Some of that writing might actually be quite beautiful as well. However, when we do this, it becomes an info-dump - a large amount of information that breaks the reader away from the narrative. Also, we are likely offering more information than is necessary. Does the story depend on the reader knowing the size of the character's ears or how the bridge of their nose bends? Probably not. Maybe the reader just needs to know that our handsome, fair-haired lead has a disarming smile and blue eyes that could never project anger. We give that to the reader, they fill in the blanks, and the story goes on.

Now, there can be a good reason to use a lot of description, and this is where the economics of the matter comes in. One might want to write a paragraph describing, say, downtown Chicago if it contributes to the mood surrounding the story. If our character is a Midwestern hayseed who just moved to Chicago, then dedicating a paragraph to describing the size and scope of the city through this farm boy's eyes becomes a wise investment in words. Describing the city's grandeur compared with the character's expectations creates a very strong, lasting presence in the story. In this regard, it's not an info-dump because both the setting and mood are stronger for its presence.

Ultimately, descriptions are most effective when used to target important story points and make them stand out. Whether it's highlighting a freckle on a character's nose or some of the tallest buildings in the world, the purpose should always be to draw the reader's attention to that particular detail. Anything else is just showing off - even when it's something worth showing off, such as Chicago.