Be honest - when you think of Friday the 13th (such as it is today), do you think of bad luck? Do you get a little extra superstitious on this particular date? When something bad happens, is your first impulse to blame it on the calendar? A surprising number of people have some kind of discomfort with this date - triskaidekaphobia in medical parlance - and many can support their fear with sound examples of unexplainable, bad things that happened on this very date. Does this validate all the things about Friday the 13th? Not really. Yet somehow, it persists. 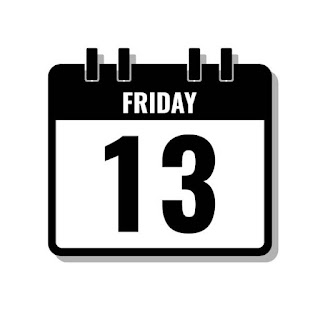 What ingrains this date into many people's minds is that it is demonstrated to be bad through examples, then future bad events are tied to that date as well. It would probably not surprise anyone that there is no scientific evidence suggesting there are more accidents, natural disasters, or other other tragedies on this data than any other, and yet here we are. No - people believe what is suggested and shown, even if the example is an exception rather than the rule.

You might be thinking, "What does this have to do with writing?" Fair question. The answer is simple - writing (at least in fiction) is about making the reader believe in things that never happened. If I create a story of a small family growing up in Kansas during the Vietnam era, the reader needs to feel this is genuine, even though such a family never existed. This comes with a lot of work, but more to the point, it often has to appeal to the reader's feelings and emotions, sometimes at the expense of reality.

To be honest, I do not have many memories of the Vietnam era and I know very little about Kansas, having been there only once for about two hours when my flight to Chicago needed to take an emergency landing. This does not give me a lot of information to work with regarding Kansas, but I do know the basics so I can start my fiction from there. The capital is Topeka, so if I say they live on a farm 80 miles outside of Topeka, it sounds real and the reader buys in. It's a vague location so my lie can't be disproven and I don't even need to do much research for this.

Now comes the tough part. I have no idea how people from Kansas talk, whether their Midwestern habits have a cultural drift one way or the other, whether they prefer Pepsi or Coke, or a million other little things. Now, if I am selling this novel primarily to the good three-million people in the Kansas market, I better nail these facts. However, to a broader market of 330 million in the US, these details don't necessarily need to be accurate, they just need to feel accurate. They need to be reinforced, constantly brought up, and driven home by my narrative.

Let's say the family lives by a river. Well, typically, people do not think of Kansas as having rivers (it has plenty, but they are actually creeks feeding into lakes). My job as a writer is to either convince a bunch of readers there's a river in the middle of Kansas, or turn the river into some no-name creek I made up and sell the reader on that. And if the plot absolutely requires a big river, well, it looks like my little Midwest family is moving out of Kansas unless I can really get people to believe in the great Kansas River.

Getting readers to believe in something gets easier as your writing skills, and when you are at the top of your game you can get them to suspend their belief just long enough to accept the Kansas River. However, it's easier to set things up with a series of lies that are believable enough to accept, and fit in with the reader's presumptions, no matter how false they may be.