I've done a lot of chatting the past few weeks about description and minimal word use. While economizing our word use is a good lesson to learn on its own, it can also feed into other parts of our process. With that being said, I'd like to explain a writing exercise that helps us stretch out and prepare for writing projects. It's called Barebones Writing, and it's an inside-to-outside way of building a story. And not surprisingly, the first steps require a minimum amount of words. 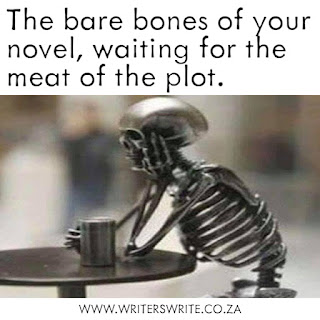 In a sense, this is like outlining, and at its core, the first step resembles an outline in a lot of ways. The only difference is that we work through our steps and our stages through our narrative process rather than a cold, bullet-and-line structure. We don't paint paintings by first establishing a frame, but by sketching out the image, and building from there. So on that note, let's begin.

The four steps of a basic story are simple: A goal is recognized, a goal is pursued, a goal is achieved or lost, the journey is acknowledged. (The last step, sometimes referred to as a denoument, is minimal and sometimes even left out if achieving the goal satisfies the mission). In Barebones Writing, we start by writing a quick paragraph discussing our character's engagement with each stage. This paragraph doesn't have to make it into the final copy, it just has to relate to it.

Let's start with an easy example: Our character, Tom, is 17. Tom wants a college degree (stage 1). Tom applies to college, is accepted somewhere, attends courses, pursues a major, and spends a lot of money in the process (stage 2). Tom finally graduates (stage 3) and now prepares for the business word (stage 4). That is a story in three sentences, and our first job is is to take on each sentence and do a write-up. Our first sentence could be written out as:

"Nobody in Tom's family had ever gone to college, so he wasn't sure why he wanted to. He had been raised by people in a variety of trades that made good livings, but he wanted more. His father had been a carpenter since Tom was born, and seventeen years later, Tom's father was still a carpenter. It was an amazing talent, but Tom wanted to progress. He wanted to shape the world, not a piece of wood. For lack of a more tactful word, he wanted to evolve. This is how he started off his college application essays, and this is what he told himself every day while he waited for an acceptance letter."

Will any of this make it into the final copy? Who knows? If the final project is to be a book, then very doubtful. if this is a short story, it could very well be the opening. The point is, it creates a narrative outline with little side-points, and can be expanded upon in a number of directions. The next three steps or stages of our story should be expanded into a paragraph in a similar fashion, to create the bones of the story. This prepares us to start expanding different sections with dialogue, transitional scenes, challenges, roadblocks, side characters, and in general fleshing out the bones with some really chewy story arcs. But the first part is the difficult one - building the bones of the story.

Give it a try without any personal restrictions and see what develops. Once you have those four paragraphs, ask yourself what would start making these events come to life. Start looking for a jumping point, and just keep writing.

Posted by James Pressler at 2:57 PM