Writing and the Rules

I have been thinking a lot about rules lately (which has nothing to do with all the new stop signs put up in my neighborhood for absolutely no reason). In writing, there are a lot of rules to learn, but as opposed to the rules of the road, we learn these writing rules so we know the most effective ways to break them. By writing within the rules then occasionally going around them, our words become that much more effective. With driving, we just get tickets. 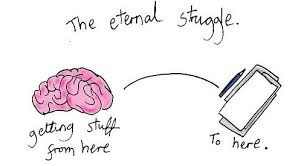 Now, that being said, there are some rules that are pretty hard and fast, and you shouldn't try and figure out ways to write around them. The rules are there for a reason, and people end up learning the hard way just why these rules have served well for so long. So to save everyone some time, I thought this time I would mention some of these rules. Take as you will, and go from there.

- Keep a consistent Point of View (PoV) in each section: The purpose of having a specific PoV in each section or scene is to give the reader a firm setting from which to view the story. Whether it is from the inside of the main character's head, an outside observer, or an omniscient perspective, this grounds the reader. If the reader enters a conversation or an action scene from one perspective, and things start to shift around, the reader loses their footing within the story and can even misunderstand what is being presented, depending on who they believe is receiving it. This doesn't mean that different perspectives can't be offered from time to time. The important part is that these be offered in separate sections, giving the reader time to readjust things and prepare for a new PoV. Mixing this up in the same section is grounds for dismissal.

- Beware of adverb addiction: We are always told to use active verbs and engaging action. One way to enhance that is through adverbs, but this can be a cheap fix. "He quickly ran down the stairs" is an example. "Quickly" is used to enhance running, but seriously, what other way is there to run? Quickly, briskly, and their speedy cousins are unnecessary because they say what the verb run is saying. Now running haphazardly, clumsily, drunkenly, or carelessly adds something to the discussion that the verb alone does not adjust. Before you go overboard with your adverbs, ask if they are even necessary.

And lastly, on a personal note, there is no conceivable reason to use parentheses within quotes. Quotes capture the spoken word, while parenthetic phrases represent words not spoken. Every time someone writes, "I am most certain of (though I cannot guarantee) my conclusion," an editor cries. Just stop it.

There are plenty of other ones to point out, but you can get a lot of mileage out of this. And many others can be negotiated with - as opposed to all the new stop signs around my house.

Posted by James Pressler at 4:08 PM