Sometimes I get this question and it usually lingers with me long after I've answered it: "I'm not sure how to end the story." This question is not as easy as it may seem, because it's one that touches on philosophical themes. Does any story really end? Isn't the end of one story just the beginning of another? And, of course, is this work something that you plan on continuing? But all that aside, it's worth taking a look at how we wrap up a piece of writing. 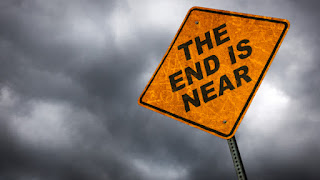 First and foremost, we need to go back to something we should've been thinking about when we created this piece: "What do I want to say?" Our stories need some purpose and some reason for us to create them - a statement to be said, an idea to be discussed, or maybe the whole piece is a very long answer to a simple question. The point is that we need to think about this initial motive in order to know where to wrap things up.

Think about a book series or some show you've streamed that you've invested a lot of time in, and the conclusion left you with a sense of satisfaction. What feelings resonate with you the most? Was it the sense that the characters had grown and developed in a way very much in line with the story, and that you were a participant in it? Was there a satisfying sense of accomplishment at the end? Perhaps a strong message was made about life or morality and that really stuck with you. These are the things we need to think about when we ask ourselves how we plan on ending a story.

Now think about a similar story where the ending fell flat. (Game of Thrones comes to mind, plus a few Netflix series, but I won't go into specifics.) Think about the parts that made you say, "We were building up to that?", "What about all these other story arcs?" or my favorite, "So... that's it?" Each of those questions should prompt you as a writer to recognize how you would've created a more satisfying ending in the broadest sense - not whether a particular character lives or dies, but, say, whether or not the message from their story was clear and complete, and all the factors leading up to that were brought to a satisfying point.

Once you can look at those good and bad examples, look back at your own story and ask, "What do I want to say?" and "What will the reader want to take away from this?" Sometimes, a character's happiness is destroyed, but if that was the inevitable result of their actions and there was a clear track leading to that point, such an ending can be satisfying. Sad, but satisfying. However, a happy ending for someone who clearly never earned nor deserved it can be one of the more disappointing endings around.

Conclusions are difficult, and they should be worth the deep investment in time and thought that the reader has placed into reading your story. This obliges you to take a good amount of time to answer that simple question, "How do I end this?"

Friday's post will likely be small if it exists at all, since I will be attending a big writing workshop. My apologies, but rest assured, it will provide ample fodder for the next few commentaries. So until then, just keep on writing.

Posted by James Pressler at 1:41 PM