The Value of a Few Words

Even during my days in the financial world, a part of my mind tuned in to just how intricate the writing process was. It was rumored that former Fed Chairman Alan Greenspan would write his speeches while in the bathtub, and it took him twenty minutes of intense consideration before he came up with the phrase, "irrational exuberance." ("Irrational exuberance" became the buzz phrase for the late 1990s, and became synonymous with the tech boom/bust that followed.) Now, the whole "twenty minutes of thought" could just be the market version of gossip and story-telling, but I sensed that Greenspan had quite the writer's mind. 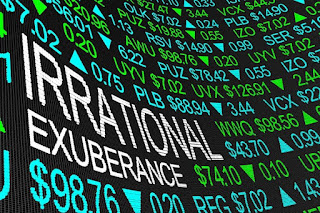 Now, some people would argue with this next point, but I believe there is no such thing as a throw-away word in writing. Every word we use, be it in narrative, dialogue, or whatever, often serves more than one purpose. In fact, we should make sure that at any given opportunity, the words we use do as much heavy lifting as possible. If we find ourselves just using words to fill the space between our points, then the reader will surely feel that the writing is just empty calories.

Let's look at Greenspan's quote (my apologies for the economics talk - there will be no quiz) and see just how he used his words:

"We can see (less uncertainty) in the inverse relationship exhibited by price/earnings ratios and the rate of inflation in the past. But how do we know when irrational exuberance has unduly escalated asset values...?"

Now remember, this is just a guy sitting in the bathtub, preparing his comments for an interview. Look at how the first sentence is filled with a bunch of financial market talk about ratios and inflation and such. Not really interesting for the average person, and nor should it be. This sentence is clinical and dry, and it lulls its target audience into a sense of familiarity, while those outside its focus might very well change the channel. The entire thing sounds analytical, even brutally scientific, as if presented by a research committee that rarely got out in public or dealt with social settings. But that's what makes it great - it's all a set-up for that next part.

The next sentence starts off as a question, which draws the target audience in immediately. From their familiar position, they are now challenged to rethink all they had grown comfortable with, and the first unfamiliar phrase in that question is "irrational exuberance." It is placed after a string of tiny set-up words, and it hits hard. All the market talk that comes afterward is now captured by those two words, and it quickly becomes a reference point for all future discussion on the subject.

This is part of the sculpture of writing, the verbal poetry that comes with what we create. There were plenty of ways to discuss the wild markets of the times, and plenty of articles were written about it. However, the phrase that pays was two words that took twenty minutes to write while soaking in the tub, and they now define that era.

The next time you decide to just plow through something and throw around a bunch of words without giving them much thought, maybe think twice. Remind yourself that you could be on the verge of writing the perfect phrase, to be remembered for decades to come. Give yourself a moment to think if those words can do more. Consider if you can put more punch into what you are trying to say. Maybe draw yourself a bath.

Posted by James Pressler at 1:35 PM