Some of you may have caught this on the news, but I am here to share it publicly. The 2022 Nobel Prize in Literature was announced, and for yet another year, it wasn't me. With no disrespect for the winner, Annie Ernaux, I was hoping I would win this year as an underdog. In fairness, I was not even nominated, but that would've made for an even better underdog story. And if Bob Dylan can win it, there's hope for me as well. 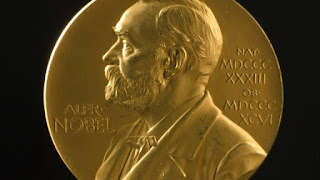 That all being said, I thought it might be beneficial for all future writers and Nobel Prize winners to offer a little discussion of some of the common qualities exhibited in the works of Nobel laureates. After all, they won it all one year, so they clearly know what they are doing. This doesn't mean we have to emulate their work or even study everything they've written. We just have to consider some of the qualities they exhibited with such mastery and ask ourselves if these are traits we can improve in our own works. Let's take a look at a few of these qualities and see just how we can use them.

Observation. Most any writer is obliged to communicate a view of the world to their reader that resonates in a way no other writing can. Before someone can write such an astounding message, they first have to be keenly aware of the world around them, particularly those things that relate to just what they want to discuss. If a person wants to write about feminism, or racism, or class division, they need to really examine the world around them to see just how pervasive the subject is. It is an easy out to talk about class division simply because one was raised in poverty. It's a good start, but the writer should really see just how this subject influences the world they haven't seen as well. The world's a pretty big place - never assume you know it all. The observant writer looks for opportunities to explore the unknown and leaves themselves open to new ideas - even ideas that contradict what they might believe. This can open doors to more developed, immersive writing.

Originality. This one's tough, but if we use the first tool of observation enough, we start making connections that other people haven't made yet. When we start seeing more of the world, ideas should start popping about in our mind. New experiences lead to new thoughts, and a good writer will take these wild, original ideas and start putting them to paper. It doesn't matter if the ideas are genuinely original and new to the world, they just have to be new to the writer willing to explore them. The first time I had the opportunity to go to a foreign country and see other cultures living within their familiar environment, my mind exploded with questions and thoughts about what this implied for other parts of my life, and I started writing about those things. Looking back, none of those new ideas were different than what plenty of people had asked plenty of times before. However, they were new to me, and as I explored them, I grew as a writer (and as a person).

Depth. Let's think about some of the subjects I mentioned in the observation section - we will focus on class division in particular. Now, this is a pretty big topic to explore, and the mind can go wild just expanding on all the different aspects of it - generational differences, racial biases, inter-class conflict, us versus them, wealth redistribution, poverty and moral hazard, etc. We would do ourselves a favor in understanding something about all these ideas. However, our Nobel laureates have the knack for sharpening their focus on a particular aspect and drilling into it, asking the deeper questions and investigating the answers. They become masters of a viewpoint within that particular subject, and when they write about it, they bring those insights to a reader who cannot help but be pulled in by their intensity. It's a lot to ask a beginning writer to become obsessive about a particular subject, but the best takeaway is to really get into a subject and don't be afraid to dig beneath the surface and see what lies underneath.

Of course, there are plenty of other traits these laureates share - passion, voice, precision of thought, and so forth. However, these three are ones that any writer can build upon. And on that note, I am going to get back to my writing. After all, it's the only way I can make the 2023 nominee list.

Posted by James Pressler at 4:34 PM