The other day I sat down to watch what turned out to be a very interesting movie (dealing with Asian themes of the supernatural - this is important). I won't offer a full review or anything - that's for someone else's blog - but I will discuss one scene that both popped out as an eye-catcher and yet somehow threw off the whole rhythm of the movie. In this scene, a woman, haunted by her past, hears sounds in the yard one night and goes out to investigate. In the light of the moon she sees a fox, and the fox has nine tails. Alarmed, she goes back inside, having recognized the fox from an old article of clothing from her past. Then the story goes on. 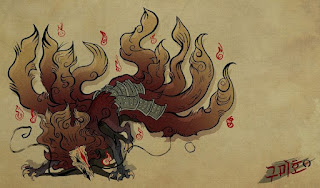 Now, I don't know how many tails are on the foxes in your area, but I am guessing the average is somewhere around one. This was a very special fox and required some special effects to create, and if you know where this is going, you could read into all the supernatural implications present with the nine-tailed fox. However, this story brings forth this stand-out creature, shows it to the audience, then lets it go away without discussion or implication other than the connection to the image on some old clothing. Most viewers will understand the fox-clothing thing and move on, but indeed this was a missed opportunity to really engage the audience.

In the context of the movie, this weird little fox was a Korean kumiho (known as huli jing in China, kitsune in Japan). They represent many things in Korean mythology, but primarily they exist as the embodiment of a tormented soul. With this fact being introduced, the connection between the supernatural, a character haunted by their past, and the appearance of a kumiho in her yard should be crystal clear, and it all builds into something very dramatic. However, leaving out the one fact of what the fox represented not only reduces the drama of the scene, but leaves the reader a little confused about what the nine-tailed fox cameo was all about. This, in short, is a failure of context.

Sometimes, people decide to have such elements in their story and introduce them by a character doing a five-minute info dump about tormented spirits and kumiho. This all but showcases to the reader that this thing will pop up later. This can be distracting because it can break the story's pacing very quickly and reduce the impact of what was supposed to be a surprise appearance by the fox. However, something has to be done to introduce this foreign element, otherwise it comes, goes, and the reader is left saying, "Huh?"

The introduction is best done through context - offering comments and subtext about restless spirits and cultural norms that build a framework around the reader without stating the obvious. By creating a mood where spirits embodied as animals feel possible, it guides the reader without holding their hand. This way, when the big scene arrives, the reader puts together the pieces and immediately identifies the kumiho, even if they don't know it by name. The reader is engaged at that point, and the writer has gained their interest for the balance of the story.

Context is a very important part of any story that brings the reader into unfamiliar territory, as it establishes some groundwork without getting in the way of the narrative. Every writer needs to remember this, and make sure that its used at any point where a critical step needs to be taken. Without context, those steps can be missed, leaving the reader detached from the story from that point forward. One thing that's scarier than a kumiho is a disappointed reader.

Posted by James Pressler at 4:41 PM