Knowing the Story, Understanding the Arc

Have you ever met someone who finds out you’re a writer and promptly reveals to you a great secret? This person has a great idea for the next best-selling book. The hero will be more popular than Harry Potter or Katniss Everdeen, and it’ll do more business than Harry, Kat, and the Twilight saga combined. This person has everything ready to go – all that needs to be done is the actual writing.

I hate that person. 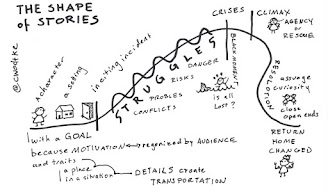 Hatred, however, is not my style, so I just ask them to explain the story arc. They rarely know it. They talk about some cool fight scenes, and some great images in their head, and maybe one character they want to include who’s just like their hilarious college roommate, Pork Chop. But there’s no story. There never was a story. No epic saga. J. K. Rowling sleeps peacefully tonight.

Writing is a pretty empty tool if it can’t tell a story, and telling a story requires more than writing. It requires an understanding of what a story is, and how all those tools we’ve learned along the way can bring about this conclusion. This is where things really start to come together; where the tools meet the parts and we start putting together something powerful. This is where the rubber hits the road.

At the very least, every written piece should be written with the intent to say something, but size and style matter. A poem should express a mood, feeling, or sense of being, and that doesn’t take very many words (there will be a poetry post in a few weeks that I advise all writers look at). A poem creates a moment in isolation, so the structure is minimal and the demands are few. But as our works expand, so do the requirements of larger works, and we need more tools than just the written word.

A short story centers around the action-reaction of an event, usually with a situation-response-conclusion structure. This is a very early version of the complete three-act structure used in novels, and perfecting it strengthens all writing. However, short stories take advantage of their brevity to offer surprise third-act twists that come through the best in brief amounts. Edgar Allen Poe, O. Henry, Rod Serling and many other brilliant short-story writers used their limited space for sharp, surprising story-telling, often with ironic twists that have become hallmarks of writing.

In short stories we start using our tools of emotional description and scene-building, but only in ways that directly contribute to the story. We write with an economy of words, not an expanse. Foreshadowing is good as well, but kept limited and efficient because we are driving along a narrow path. Mood is important, but targeted. If there is a need for a subplot blended in with this story, we might want to think of a novella rather than a short story. However, plenty of short stories have become novels so feel free to change rhythm if that’s where the writing takes you.

Once we reach the level of a novel, we can consider the full story arc. The three-act structure mentioned with short stories can now grow to its full glory, with the individual acts now complex structures. Instead of the three steps of situation-response-conclusion, we now have the build-up to the call to action, the journey and its obstacles, and the resolving event. (don’t even get me started on five-act structure). And depending on our genre, these acts can each take on different shapes.

But the arc is never easy to see at first, and writing is worse if we don’t at least understand the structure. The three-act structure is by no means mandatory, but it is a natural fit for any situation (in or outside writing) where conflict resolution is involved. If you choose not to use it, at least understand how is doesn’t fit and what makes your approach the better one. A brilliant article by the writer, Emma Johnson, is an insightful breakdown of the three-act structure as it is used in the novel, The Hunger Games. It’s a highly recommended read, and hopefully an inspiration to get you writing that novel.

The next few posts will break down each act of the structure, and demonstrate the ways they have been applied in different writing genres. After learning those, you will have a pretty strong toolkit for working on your novel.