Details and How They Influence Writing

There are no tigers in Africa. Chicago does not have car pool lanes. The Los Angeles Lakers were originally from Minneapolis, and the Utah Jazz first played in New Orleans. There are more people claiming Irish heritage in New York City than in Ireland. 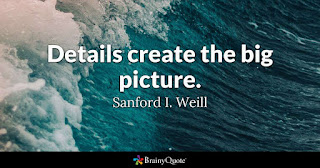 As odd as these facts may sound, they’re all true. More to the point, not everyone might know or understand them, and some might entirely disagree. That’s human nature, and it makes for some great talking points. (Side note: In Nelson Mandela’s moving autobiography, Long Walk to Freedom, he mentions how he and his fellow inmates in Robben Island discussed whether tigers lived in Africa, because they were not all sure – even though they all lived in Africa.)

The point is, these little details can make a setting feel genuine, or missing them can turn it somehow off-center. Just as this applies to dialogue (see my previous post for this discussion), those little details will create depth and dimension in a setting.

Plenty of these details will fly right under the radar to the average reader. Most people won’t think twice about a Chicagoan sitting out on Navy Pier, watching the sun set over the lake. They will enjoy the scene for the writing, never caring that Lake Michigan is east of Chicago, so the sun rises from the lake but doesn’t set over the lake. Some people might notice; most will not.

The important part here is not geography, it is that the writer is missing an opportunity to highlight differences – to create a dramatic moment from something as simple as where the sun sets. The scene can be the same Chicagoan at the same location, but instead, he sees the shadows of the skyline stretching across the water or yearns to be on the other side of Lake Michigan so he could see that lake sunset. Now the location gains some texture

I’ll offer a simple life example – the stars. Most readers of this blog live in the northern hemisphere, so they are familiar with the Big and Little Dip per, Orion’s Belt, and the Northern Lights. I spent my first thirty years in that same hemisphere, seeing the exact same things and taking them for granted. Then I went to Cape Town, South Africa, and noticed how the world changed in so many ways – especially with the stars.

One night I looked up, and all my familiar constellations were gone. The Big Dipper had run away, taking the Little Dipper with it. Cassiopeia had left her throne, Orion had gone fishing. The northern stars were gone, but now I had the Southern Cross to gaze upon, That Crosby, Stills, and Nash song finally made sense. I might’ve looked like quite the oddity standing there in the night, staring to the southern sky, but to me, that moment meant everything. I was in the story now.

The little details help in filling in the environment, but they can become amazing focal points for the main character during the journey of growth and realization. As mentioned in a previous post about story structure, the protagonist should be confronted with situations and elements that prompt change. These can be fights, tough choices, or sudden losses, but they can also be realizations. The drama can be as big as a near-death experience, or it can be as simple as seeing the stars a different way.

The Japanese traditionally use four fingers for chopsticks, while the Chinese use three. Europeans hold cigarettes differently than Americans. It is courteous to pick your teeth after a meal in Morocco. When we observe these little differences, we can actively decide if the character knows about them, is aware of the difference, or has a realization once the difference becomes apparent. And as writers, we should always be looking for those little things that seem odd. And any one of these would not only add some depth to your writing, but would make a good focal point for observational realization.

From a cultural perspective, some of these observations are difficult to track down without a passport, some spare time and a lot of frequent-flier miles. In this case, I highly recommend observational comparison reference books to help fill in gaps. The one I use the most frequently is Going Dutch in Beijing, but a few simple internet searches about regional behavior differences can get the same result.

Most importantly, if a writer really wants to make a locale stand out – whether a real place or fictional – they should not be afraid to do their research. Not the scientific research of hypothesis, test, etc., but a little investigation into what makes a place so distinct. With real-life places, this is easy. With fictitious worlds, this is more difficult, but far more enjoyable.

Next stop – research and world-building