The First Words are the Hardest

The first time I was shot, the only pain I remember was from falling against the check-out counter.

Now, if you are reading this sentence, you are likely expecting to find an answer to some of the questions presented by that opening line. That is what a good opening sentence does – it moves the reader into the narrative. The reader wants to know what happened, why was I by a check-out counter, and why did I say, “The first time I was shot,”?

(No – I have never been shot. I have, however, fallen against a check-out counter. That hurt.) 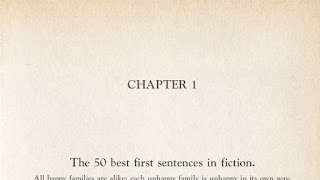 Opening lines should be memorable, perhaps more memorable than the book itself. “It was the best of times, it was the worst of times,” “In the beginning,” and so forth are part of the literary lexicon. There is good reason that they have such a lasting effect, but before we get all tied up in the perfect opening line, let’s think about what that line should be and shouldn’t be.

The most important rule of any opening sentence is simple – the first sentence should make the reader want to read the second sentence. Not just read the second sentence, but want to read it. The opening sentence needs to be the hook that reels in the most reluctant reader. It can be done with immediate action or suspense, a very clever line, or dramatic foreshadowing, but often it is as simple as quality writing that promises an enjoyable story. J.R.R. Tolkien starts The Hobbit with, “Once upon a time there was a hobbit.” That’s enough of a promise to get things moving.

One important rule of what to avoid – establishing the scene for the first chapter with the opening sentence. Usually, chapters should start with a defined setting, but the first chapter is different. The first chapter is the beginning of the book – a much greater demand than where that chapter takes place. The chapter can be set up in due time. The reader needs to be brought in first.

A common mistake is when writers treat the opening of a book like the opening of a movie. The narrative focuses in on the world, narrowing its perspective toward the life of the protagonist and giving the reader a sampling of their existence. That can work as a chapter, but it will not work as an opening line. That first sentence cannot be the written equivalent of, “DreamWorks presents…” Rather, the opening sentence needs to be what brings you into the theater, so to speak.

So what should the opening sentence involve? The requirements are fairly simple. First, it needs to contain an element critical to the rest of the story – a theme, the mood, the main character. It also needs to set the pace for the tone of the writing. And ideally, it should plant the seed of a question in the reader’s mind – not by overtly asking a question, but by presenting something interesting that prompts the reader to pursue an answer. In the opening of The Hobbit, the first line creates a simple question in the reader’s mind – what is a hobbit? In A Tale of Two Cities, the reader is presented with a contradiction of, “It was the best of times, it was the worst of times,” and so forth, and pursues an answer. Simple, yet effective.

Possibly the single-biggest error writers make when writing that first sentence is getting bogged down on writing that perfect first sentence. Yes, those first ten-to-twenty words are very important, but there are eighty-thousand words or more just waiting to file in and fill those pages. Furthermore, as those words all fall into place, the story can change. The writer can discover relationships, themes, and even plot twists that didn’t stand out when this was all about that first sentence. In short, the story can change. And if that story changes, perhaps the first line will change too. The opening might be better suited to presenting one of these newly discovered elements, or taking on a different voice. There will always be time to make that first line perfect. Don’t let the rest of the writing wait for that moment.

And if you ever get frustrated with the opening line, put it aside for a bit. It will wait for you, I am sure. It is better to tackle it when you are ready than to agonize over it when you have no better ideas. It is even worse to type up something horrible. The unofficial Worst Opening Line Ever – “It was a dark and stormy night,” from Paul Clifford, by Edward Bulwer-Lytton – violates all the rules, but someone considered it good enough for that moment. Now, 188 years later, it is more memorable than the book, but for the wrong reason.

Posted by James Pressler at 3:26 PM