Drama, action, and narrative can each be sorted into two categories: external and internal. Most readers overlook this simple fact, but to be fair, readers do not care about which group is used, as long as the story keeps moving. As writers we always need to consider these touches, because they each make different contributions. 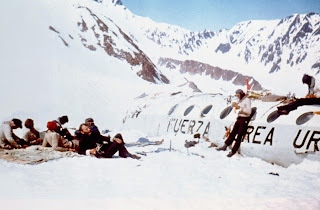 Let’s look at a simple thriller: A plane crash-lands high in the mountains, and the survivors have to find a way to make it back to civilization. We see this one done quite often, from the short story, Ghost Walkers (later turned into the movie, The Grey), to the true-to-life novel, Alive: The Story of the Andes Survivors (also made into a movie.) This is simple survival, but the tension and dramatic build come from two completely different areas.


In external drama, the problems come from forces beyond the control of the main characters: brutally cold weather, the thin air of high altitudes, or a pack of wolves stalking our characters. Everything actively threatens our characters, from running for their lives to trying to traverse the unyielding frozen tundra that seems to challenge them at every step. This technique has its pros and cons:


Internal drama, such as in Alive, plays off of tension rather than the suspenseful build from the threat of the unknown. No packs of wolves pursue our survivors, and the brutal conditions are manageable, if not comfortable. Rather, the internal drama is the inevitable question of survival, and how far our heroes are willing to go to that end. There is an ever-looming threat around these people, but the threat is when they might have to make some horrible decisions about survival. Here, the up- and down-sides are very different:


Now, these two stories are strong examples of their respective camps, and perform well because they each do a good job working within their self-imposed boundaries. They also mostly avoid giving in to the pitfalls of their genre – when an external drama gets weak, it is easy to throw in an unexpected event like an avalanche; for an internal drama, a three-page narrative about why a character is so conflicted about facing a particular decision. Stories can be very successful just living in one camp or the other.

However, blending the two approaches and balancing them accordingly can be very engrossing. In keeping with our plane-crash survivor theme, I suggest Lord of the Flies. This classic blends together these two dramatic approaches, creating a well-balanced combination that offers the best criteria of each while countering their weaknesses. Of course, writing with this kind of balance takes that much more work and incredible patience to get things just right. If you are not sure whether it is worth it, let's just say that more people have heard of Lord of the Flies than Ghost Walkers or Alive.

When a writer approaches a story, one question that should always sit in the back of their minds is, “How should this conflict be played out?” When the writer asks themselves that simple question, they should consider the pros and cons of each one, and decide which contributes the most to the story. After that, it’s just a matter of writing.