Several posts on this blog have talked about the intricacies of character development. However, nothing is more difficult than the first step - figuring out who that character is. Not just name, rank, and number, but who they are relative to the story. This can be difficult, so I thought I would offer an exercise in figuring out how to bring out the important parts of a character.

The character is you. 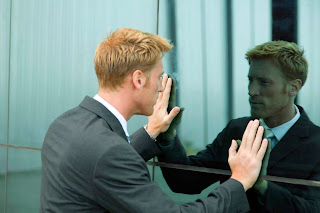 Before you get alarmed, I will use myself as an example to show how this exercise works and what there is to gain. It's fairly simple, and of course, when you do the exercise, you don't need to publish, print or save one written word. Just try this out and see how it feels.

I start with a simple narrative beginning: "I looked in the mirror and tried to recognize the man in the reflection." (Side note: Never describe your character in a first-person narrative by looking in a mirror. It is a worn-out cliche.) At this point in the exercise, I start writing about the various features in the mirror: The blue eyes, the receding hairline, that little scar on my cheek that is only visible if someone knows where to look. I rattle off a whole list of those things, just exploring odd details and seeing what they say. The way the bridge of my nose tells everyone I once hit a steering wheel with it, the way my eyebrows hop about when I laugh, that one tooth that doesn't match the rest. I lay out every trait possible.

Now here's the fun part. Make up some story arc. Anything. You are preparing to go to work. Heading out on a first date. Meeting a son you never knew you had. Heading to Uzbekistan for international intrigue. Preparing to rob a bank. Give your character a very specific purpose (that you are not legally obliged to follow through with).

Once you have that, compare all those things you described about yourself with the mission you are heading to. Think about whether those qualities about yourself are relevant to the thing you are doing. Is the quality you described totally relevant? Totally irrelevant? Or is it a possibility, a quality that can be described in a way that fits the situation? Does the hairline make a difference for that trip to Uzbekistan? Would that barely noticeable scar matter on a first date - or does it make you very self-conscious when you are trying to relax and enjoy yourself?

The important part of this exercise is actually two-fold. First, a critical part of this is to ask ourselves if something is worth mentioning. We all have different hair, eyes, ears, skin, teeth and so on, but we don't need to discuss them in the narrative if they offer nothing to the story. Unless my story pivots around my receding hairline, does it matter whether I describe it or not? Does the bent bridge of my nose motivate characters or press along the narrative? If it doesn't, maybe it is not worth mentioning.

The bigger part about this is a little more intricate. Let's say that the whole nose thing doesn't factor into the plot. That's fine, but we can actually use it to bring out other internal points. If this story is about going on a first date, the broken-nose issue can be used as a springboard for bringing out the character's insecurities about going on this date. The nose itself doesn't matter, but it becomes a device for showing the character's internal traits that don't show up in the mirror. The receding hairline won't push the plot, but its influence on the character can shift his actions. Maybe it makes the character wear a hat, or try to comb his remaining hair in a way to conceal everything. To really emphasize the point, the character can consider the horrors of a comb-over as a last-ditch way of hiding the sin of his hair.

Exercises like these are how we drag out not just the external traits but the internal dynamics of the character. This way, we understand not just how they look, but how they react and feel. The character gains depth and we can write them as complete people that the reader can relate to. If the reader never finds out about the eye color, well that's fine. But if that whole nose thing is used properly, the reader will not just know about the character's insecurities, but they will wonder about just how it was broken. And at that point, they are invested in your character.
Posted by James Pressler at 12:23 PM