As diverse as everyone’s life story is, they all share one thing in common: They all happened in the past. How long ago the story was will differ, but this is a common thread. It might seem like a painfully obvious statement, but the purpose is to remind the writer that the past is not the present, and the difference between the two is the basis for a good memoir. 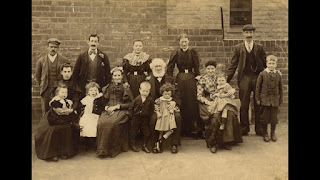 I went out the other night with some friends, and one of them put five bucks in the digital jukebox (Note: not too long ago, jukeboxes were not digital, and only had vinyl.) When my friend came back he said he put on some Lady Gaga, but wanted to hear her “old stuff.” Only at that moment did I realize that my present mind just accepts Lady Gaga as a musician, but once upon a time she was a new artist. Her “new stuff” was now her “old stuff.” That made me realize just how much things can change in a mere ten years.

The purpose of this note is never forget to bring your readers into the past. When we write about the lives of our parents, grandparents, etc., we are sharing a life that many people might not understand these days. If I was to write about my father’s life, I would talk about the three-bedroom house where my father spent his teen years and my grandmother spent most of her later years. People these days have a concept of a three-bedroom house, but this story would have to dismiss all of those modern-day preconceptions and establish the past reality.

My father was five when the Forties started. As a writer, it is my responsibility to bring out the details of that era. When two of my father’s brothers went off to serve in the Pacific, the household changed in a way we might not relate to these days. My grandmother hung a two-star banner in the window, just like other houses on that street. Conversely, my father had the excitement of finally having his own bedroom. When everyone came back from the service, not only did seven people live in that three-bedroom house (with only one bathroom), but they often had relatives and guests sleeping in the living area due to the post-War housing shortage. The back room was filled with laundry from the neighbors because the extra money helped my grandparents pay the bills and eventually pave the driveway in 1947. (Though they never did get that second bathroom.) And at night, everyone would gather for an evening by the radio in the parlor, or one of my great-uncles would come over and tell stories. Those are stories that take place in the Forties, and can hold the interest of the 21st-century audience.

Now that the background has been set for a story about my father, there is one element that needs to be incorporated, and it’s the most difficult of them all: Family. I could write a bunch of stories about my grandmother, but the only ones I knew firsthand were from the Seventies. My grandfather had long since passed away, so I never knew my grandmother as someone’s wife. Grandma was just a saintly woman in her seventies, very different from the one raising five boys during the Depression and doing the neighbors' laundry for extra money. It becomes my responsibility to try and bring out who she was back then, and present her to the world not as my grandmother, but as a mother, wife, sister, and all those things that I never saw.

And lastly, the most difficult part is writing about family members as complete characters. To be honest, this isn’t always necessary – we can write about the many heroic deeds of our ancestors without pointing out the embarrassing details that go with them. However, I personally connect the closest to characters who have flaws and shortcomings, doubts and fears, or bad habits that they just can’t seem to shake. Reading stories of those before us and their perfect lives can make us feel somehow inferior. Stories about those same heroes that include their problems and the adversities they overcame make them inspirational.

I have plenty of people in my life (that shall remain nameless) who gain my admiration not for what they did but for what they overcame. I recently celebrated the thirty-fifth birthday of a friend who was not supposed to live past twenty – there is a story of heroism. Another friend of mine overcame the worst set of problems – bad luck and bad choices – to finally get their life on track, and their story moves me to be like them. And yes, for those friends who were ultimately defeated by their obstacles, there is still inspiration in how they took on a challenge they could never win.

Those are lives worth writing about, even if just for those stories.

Posted by James Pressler at 2:33 PM