Now that theme month is over, I want to shift gears a little. Obviously, themes are important, but they really go nowhere unless the story has some interesting characters. A story lacking characters with a sense of texture and depth are doomed to fail, as the reader will want the story to be carried by people with dimension and substance. In short, the story has to be carried by people that are just as real as the world around them (and the themes surrounding them). 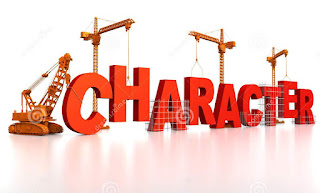 A "real" character is not as easy to write as one might think. Plenty of writers have presented a story at the workshop, then defended the story by saying, "But this person really existed. This story really happened." Whether or not the story or the character is real does not matter. What matters is that the reader feels that they know that character - real or otherwise. Most of my favorite literary characters never actually existed, but they were written so well that they lived in my mind. Of course, if the character is real but is not backed by a great narrative and those little details, they don't leap off the page. They fade into the background.

To offer an example, I will use myself and reveal what makes me real. My go-to drink is gin and tonic (expect when I am editing; then it's scotch and soda on the rocks). I haven't had a cigarette in 16 years and I still get urges. When I get anxious, I get tremors in my right hand. I made enough money shooting pool in college to pay for all my textbooks, and the happiest day of my life was a cold November night in Cleveland when the Chubs won the World Series.

Now that you know these things, am I more real? Likely, that is a no. You probably know me better, but does it give me depth as a character? Not yet. While I have listed a series of qualities and quirks, they do not give me texture until I incorporate them into a narrative. A bunch of traits are lifeless. Putting them into motion makes the character jump off the page, because all those details are now moving parts within the greater story. They become elements people think about, even if they are not keys to the story. The story may not pivot on whether or not I am drinking my gin and tonic, but if you read about me and my drink, you connect with me on another level. And if my drink gets spilled a little because my right hand is shaking, you immediately think about my anxieties. Now you are invested in the character, whether you like it or not.

Here's a simple writing exercise to try when you have some spare time. Pick a character - literary or from the movies, real or fictitious - and write about one particular trait that doesn't seem important to that character's main story. If you pick Dr. Charles Xavier, the wheelchair-bound leader of the X-Men, maybe write about his sex life, or making his mansion more handicapped-friendly. If you choose Billy Pilgrim from Slaughterhouse Five, maybe explore the troubles of a tall, skinny kid growing up in New York during the Depression. Did he go through a lot of shoes? Does he mind walking barefoot because of this? Explore the little things about these defined characters, and witness how your understanding of them expands.

When I first explored writing The Book of Cain, I knew I needed to know Cain beyond what was written in Genesis 3. I thought about who he was and what he went through. He had no idea what death was until he killed his brother. Did he understand the shame of lying? And when he was cast out, did he know what needed to be done to be forgiven? Was it possible? These questions were never really addressed in Genesis, and many things were left for interpretation. And within that interpretation came the idea for making Cain who he was in my book.

If this sounds like a tough exercise, well, it is. However, the most difficult part comes not from writing the piece, but from understanding the character. The more you understand the character, the easier it is to write about their average day. And once you can write the character easily and naturally, the reader will feel it as well.
Posted by James Pressler at 2:04 PM