“Should I Write This?”

At least once a month, someone in one of my writing workshops will have an idea, but question whether they should write a story, an essay, a character sketch. Naturally, most workshop members will try and motivate that person to write it, reminding them that they are a good writer and they can make the story work. Usually the person explains why the story might be difficult to create, and perhaps there is some catharsis from just discussing the subject. However, there is something much more powerful at work here – the writer is having a realization they might not be aware of. 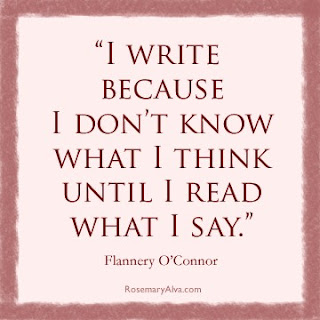 When a writer questions whether they should write something, they are usually not questioning their own writing skills. At that point, they are realizing just how powerful a tool writing can be. The writer is experiencing the little bit of reality that is generated by the written word, and how it can create a world greater than the one around us.

In my opinion, this is an opportunity not just to write a story, but to channel some very powerful feelings into words. And by doing that, the writer will realize the power is not in the words, but in the writer.

When my father passed away, it was very unexpected. I like to think that we had reconciled all of our differences by the time he died, but of course, that is never truly known until death ends the discussion. After the doctor pronounced him dead, I had a chance to sit with his body in the ICU and make my final peace. That moment carried an emotional gravity I had never experienced before. For all the loved ones I had lost in my forty years, this was the biggest one by far. After a twenty-minute chat with him (very one-sided), I said my farewell and left. The mourning process began, and life went on.

Years later, I thought about writing up that moment, but I had my doubts. I asked a group I was in whether I should write it out. I received the same responses most others give: “You can do this,” “It will be worth it,” “You will write a nice tribute piece.” All good points, but none of them convinced me. Then, while driving home, the real answer hit me so hard I had to pull over on Kedzie Avenue and catch my breath.

Writing about that moment had nothing to do with whether or not it was good enough, or if it did service to my father’s memory or honored that moment. No – the real challenge was that by writing it, I was not only reliving that moment, but my words were filling in all the things that I couldn’t face during that quiet moment in the ICU. By writing it, I would be back in that moment, exploring every detail that had been hidden by the shock of a sudden loss. By writing it, I would surround myself with the grief of the moment and all the other realizations that hit me between the moment he died and when I put my fingers to the keyboard. It would be far more intense than that moment making my piece.

And by writing it down, I would be reliving it by choice.

That is how powerful writing is. We create these beautiful monsters that are far stronger than just a bunch of words. Our pages have more than text, they have life and feeling, they drag us into them and transport us to fantastic, horrible, tragically wonderful places. And once we realize just how powerful this ability is, it can be terrifying. More importantly, we realize that as writers we can either contain this power, or unleash it across the page. That’s when we realize the power is not in the words, but in ourselves.

I did sit down and write that piece. On a twelve-hour flight from New Delhi to Chicago, I got out my laptop and just poured my heart onto the page. I cried, I trembled, I even laughed a little. I definitely made the people around me uncomfortable (Bless the flight attendant for bringing me an extra pillow and a complimentary gin and tonic). And for the first time, I felt just how powerful writing could be. The piece wasn’t a masterpiece; it wasn’t even great. Eventually I used a modified version for a work in progress. But I realized what I was capable of.

So whenever someone wonders if they should write a piece or not, I tell them, “You are on the verge of a very special discovery that will hit you the moment you finish that piece, so you better start soon.”

In other words – write it.

Posted by James Pressler at 1:37 PM