Good Dialogue and the Ides of March

Yes, I could've talked about The Ides of March on my Friday post, which was actually the date in question, but the death of Caesar is not the point. Rather, this is about stand-out dialogue, and making the back-and-forth between two characters memorable. Some think this is easy, and yes, for some writers this comes naturally. For the rest of us, however, it takes effort and more than a little concentration. 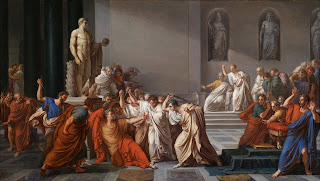 First, there is a big difference between stand-out dialogue and authentic dialogue. Authentic dialogue is required no matter what you write. If you write a story involving 19th-century aristocracy, their references better match the era and not escape the boundaries defined by that particular time. It does not have to be perfect, but nothing can stand out as being a clear violation of that rule, because it will take the reader right out of the moment. This is tricky - the first car radio was casually referred to as a Motorola, but would using this term be a distraction to an audience used to thinking about that as the name of a tech communications company? Authenticity is difficult to manage, but always has to be considered.

Stand-out dialogue, however, is memorable for how it either amplifies a particular way of speaking or runs against a way of speaking. Will Rogers, arguably the finest American humorist of the 20th century, made himself known not just because of his homespun wisdom, but because his homespun quotables were distilled in a way everyone could understand. His writing in The Illiterate Digest was far from that, but more importantly it was precisely aimed at the every-man, at the person who would appreciate it. And it that regard, his way of speaking amplified the ideas of everyone reading his works.
"When I die, my epitaph or whatever you call those signs on gravestones is going to read: 'I joked about every prominent man of my time, but I never met a man I didn't like.' I am so proud of that I can hardly wait to die so it can be carved. And when you come to my grave you will find me sitting there, proudly reading it."
- Will Rogers

The quote above is a simple distillation of something everyone believed, or wanted to believe. Between him and Yogi Berra, the words will last forever, yet there is nothing particularly fancy about those quotes. They are just thoughtful words that went through everyone's heads. He was just willing to put them on paper.

This naturally leads us to the other route - writing against the grain. If you give yourself a moment, an example will come to you. The professional gathering where someone is using unprofessional language. Talking in the bleachers at Wrigley Field, where one person is being far more eloquent than possibly anyone else. That one person at the card table who just seems to be on a different wavelength. Whatever the case, I can guarantee that in those instances, the one part of those conversations that you remember was the person who stuck out, for better or worse.

In the broad sense, this requires giving a character a different manner of speaking, which is best supported through some background information. Maybe the character's education is different than his peers, he grew up in a different area, or he just likes being different. Whatever the case, when this character talks, the writer makes sure that the words are just a little different.

In the narrow sense, this could be as simple as a catchphrase or terms that stand out from the social norms. David Letterman made a career with little, regularly-used, stand-out phrases. When other would "have a drink," he would go out of his way to say, "enjoy a refreshing beverage." Guess which phrase was remembered, and deliberately reused millions of times? For those people who insist on calling every sandwich a hoagie, we might not agree, but we remember. And God help us for those people who insist on using the word, "moist," whenever possible. We hate the word, but we remember them for using it. Constantly.

And this all leads us to the Ides of March. When I edited the book, Bughouse Square, one supporting character in particular stood out. He loved Shakespeare, he carried his works wherever he went, and threw those terms into every piece of dialogue possible. And while Shakespeare is possibly the exact opposite of how people spoke in 1950's Chicago, guess who stood out more? It wasn't the characters who sounded exactly like the time and place. It was the one man who insisted on treating March 15th as a holiday. And that is good dialogue.