The Unknown and the Unexplained

"The one thing that prevents me from sitting in my office and getting some quality writing done is the cat staring at me from atop my bookshelf. I am not distracted by its sounds; it is very quiet. I am not intimidated by its presence. I do not feel judged by its unblinking eyes. Rather, the only matter I find so distressing about the cat on my bookshelf is the simple fact that I do not own a cat."
- Anonymous 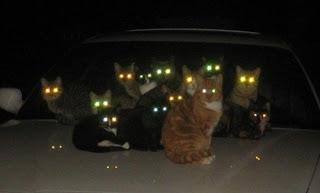 Yes, the unknown. It is the single-most powerful weapon in the writer's arsenal. So many times we talk about details, description, and how we need to consider what details to bring in to a story. Sometimes, however, the most important part of description is in fact what we leave out. Leaving out one detail, one little point can be the whole hook of the story.

From a technical point of view, this can be tricky. Consider the classic story where the character is actually a ghost looking at the world (a wonderful story to write as well as read). When we leave out the fact that they are a ghost, we have to follow the rules that come with it. The character can't interact with other characters without revealing the ghost thing, but they can talk to the other characters. Perhaps this includes an assumption that the lack of response is just the character being ignored. If they are ghosts that look just like people, we need to exclude some other piece of information to make that a big reveal. A lot of rules to follow here.

Another style is leaving out a critical piece of information that the reader just assumes. In the quote above, the cat is never described as "my cat." The possessive is never used in reference to the cat, though it is slyly used for "my bookshelf" right next to "the cat" - twice. Leaving out the possessive "my" would be a giveaway that the cat does not belong to the writer, but the reader just skims over it with all the usual assumptions. That makes the reveal all the more powerful. In a well-written piece, the big tell at the end will make the reader go back through the story to see just how they were deceived.

Of course, this becomes all the more diabolical with gender pronouns. If a character named Jean is doing something and the writer wants to conceal the gender, playing the pronoun game can have great results. "Jean held the coffee mug in her hands" immediately ruins the mystery, or forces the writer to start putting in "he" if that's the reveal. But "Jean took the coffee mug in narrow hands" spares us from even using a pronoun until it's necessary. (Note: I am fully aware that this is a fatty sentence, because what else does someone hold a coffee cup in other than hands, but that is for the next post.)

The other trick that can further this end is drawing a line between the narration voice and the character voice. If you have a character slowly falling for narrow-handed Jean, that character can use whatever pronoun they prefer - that reflects their frame of mind. However, when Jean is described by an omnipotent and objective narrator, then it is important to strip away the pronouns and leave it completely ambiguous. In this way, the character is an unknowing unreliable narrator, simply because they are working on their own assumptions, which happen to disagree with the actual facts on the ground.

These little omissions are great ways to unsettle the reader and make them really reach in to the story for all the details. Of course, it is a very demanding task for the writer, as everything has to support the deception. But there is nothing more refreshing than a reader hitting that Sixth Sense moment when the big reveal hits and they have to catch their breath and wonder just what happened.
Posted by James Pressler at 12:49 PM