A few years ago, someone I knew (also named James) died in a car accident; a head-on collision. The cause of the accident was a driver texting while driving. The texting driver crossed into the opposite lane and the two vehicles collided at a combined speed of over 100 mph. James was killed instantly, the other driver was seriously injured but survived. When I talked about this accident afterward, many of my friends said, "I hope that driver is thrown in jail for being so careless. That kind of stupidity has to be punished!" Most everyone was enraged that James died because someone was texting instead of watching the road.

Actually, James was the driver texting. James let his car drift into the other lane. James almost killed the other driver. 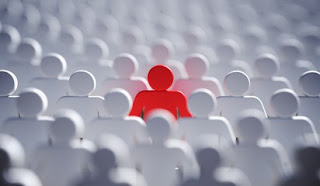 I bring this story up to show just how assumptions can play a huge role in a story, and by playing on those assumptions, the pivot of the story will stand out that much more. If you think about that story a few days from now, you may not remember James's name, or whether or not I mentioned other details. You will, however, remember how the guilty party was the person you sympathized with at first. You will remember how the story shifted. If any part stands out, it will be that. And with any story, that is the mission.

I know a lot of people (myself included) who have written about their parents, spouse, children, friends, etc. They tell a story, they express the events and emotions, and bring it to a conclusion. A nice, well-rounded story. If they wrote it to put their feelings into words, then mission accomplished. However, for those people who really want their readers to remember these people, they need to find that one aspect that makes the character stand out.

Is every person memorable? Well, not really. Some people just fade into the background, not standing out in any particular manner. However, if they are the subject of a sketch, a short story, or a novel, then there better be something standing out - even if it is just how unimpressive they are. And once the writer figures out an aspect that really speaks to the reader, then it is their responsibility to drive that point home.

In the example above, I did not offer any details about James. The part that made the story stand out was that he was at fault for the accident. So to make that story stand out, I explained the story in a manner that suggested James was the victim of someone else's negligence. I never said that directly - it depended on the reader making certain assumptions. So, all along, the story is written to make the reader think James was innocent in all this. None of that stood out at the time. However, when the reveal hits, all of that preparation makes that one moment stand out. It was all a deliberate set-up to bring out one point, and hopefully it will not be forgotten.

Think about what really needs to pop in a story. Think about that one point, and make sure you take every opportunity to set up that moment. It takes time and effort, but when it pays off, your story will stand out, and the characters will be remembered for it.

And don't text while driving. Seriously - we spent the entire 20th century not texting and driving, and things worked out. Waiting until you get home shouldn't be a problem. For James's sake.
Posted by James Pressler at 12:36 PM