Learning About Writing From the Movies

Yes, the Avengers franchise has found its way to this blog as well. However, this post is not going to do a deep dive into the many facets of the Marvel Cinematic Universe or give a review of the latest movie. No spoilers here. Rather, this will look into some of the elements that make the movies so compelling and how they can show up in our writing - and we don't even need to write about superheroes to do it. 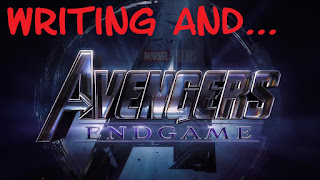 In any novel, we need the antagonist. The bad guy. The threat to our main character's way of living. Maybe the bad guy is just an obstacle or an active threat, but that role is critical. Depending on what genre we write, the antagonist can take many shapes - the boogeyman in horror stories, thrillers have the diabolical villain, more psychological stories can have the antagonist be a concept, or even a part of the hero themselves. How we present this villain sets the tone for the entire story.

The Avengers face a wide variety of bad guys, from the smaller ones that only last for one movie to the larger, overarching baddies that carry the broader arc of the franchise. What makes them stand out from many other genres is the way the enemy is portrayed. When our antagonist is more than just someone to be conquered, the story is more than just something to be read.

Look at horror/thriller stories. Often, the antagonist is fairly one-dimensional - someone seeking revenge, a monster thirsting for blood or the relentless horde of zombies. This creates good conflict and a heightened sense of tension, but the reader has very little to connect with. Ian Fleming's seventeen James Bond novels relied mostly on villains with diabolical plans and little backstory to work with. Great novels for the action genre, but not a lot of sustenance.

Looking at the Avengers series, the writers granted the main bad guy, Thanos, something very valuable - a backstory. He might be a man intent on wiping out half the universe, but we are shown his reasoning. We learn about his purpose, and even though it is definitively horrible, we understand that his mission is very similar to the Avengers: Thanos wants to protect people from their worst enemy - themselves. He wants to save them from their own destruction. His means of doing this are genuinely horrible, but now the viewers understand where he comes from and what his motive is. Even though he is a bad guy, he now has dimension. We still hate him, but we now think about him as more than just a villain. We now engage with the plot that much more, and find an interest in seeing how he seeks to achieve that end.

Now let's look at how we can put that in our writing. Once we introduce the antagonist, we should think about a few details:


This is what makes a deep, in-depth story different from the horror, thriller, and action novel genres. The reader at least understands the villain, and can even start thinking about how the villain might respond to the hero's actions. And as our hero marches along, the reader should start anticipating how the antagonist might respond or what the next steps should be.

This is not an easy process when writing a story. How do you introduce the bad guy as an in-depth character? Flashbacks? Dialogue? Occasionally switch to the bad guy's point of view? This is simple in the movies, but not when we write. It involves technique and an understanding of what the reader should discover versus what the hero should know.

If you go and see the latest Avengers movie (like everyone else on the planet), think about how the story is presented. Afterward, ask yourself if that would be the same on the written page, and would different perspectives create a different feel for the story. Think about how all the backstory was presented, and what would change if the story was mostly from one character.

Actually, do that the second time you see the movie. Just have fun the first time.
Posted by James Pressler at 1:42 PM