Wine and Tacos: Odd Pairings that Make Writing Stand Out

In this case, the mind of a writer should step in. 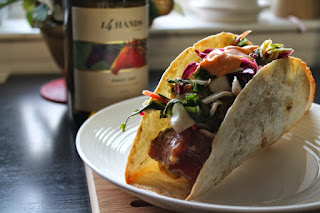 This blog spends a healthy amount of time discussing the importance of tension and conflict, and finding places for it throughout any piece of writing. Fight scenes and car chases are easy grabs at conflict, but they lack tension. Instead, tension and conflict exist when opposing things get forced into the same space and have to contend with each other. At that point, conflict and tension exist in every page, every sentence.

First let’s look at the obvious pairings – the can’t-miss, white-wine-with-chicken matches. Look at most stories where the protagonist has a partner. A married couple, two lifelong friends, siblings, etc. Since they get along just fine, the movement is pleasant but the rest is very boring. If they are well-matched, happy with each other, never fight, go to sleep with smiles on their faces, and so on, then who cares? The only reason a story should start off with characters like that is if something comes between them and creates friction – now that’s interesting. Why? Because tension and conflict enter the story.

This does not mean that any pair of characters have to constantly be at odds. A married couple doesn’t have to be on the verge of divorce, siblings long-since estranged, or friends ready to stab each other in the back. The important part is that they have differences, and that they are relevant to the plot. In other words, there has to be a stand-out quality in either the chicken or the white wine – preferably both.

Let’s look at the happily married couple. Their only issue might be the husband is uncomfortable that his wife is still in touch with an ex-boyfriend. No insane jealousy, just a sensitive subject. This creates an underlying tension. Then, when the ex-boyfriend shows up at their door, his life in danger and he has nobody to turn to who can save him and his four-year-old daughter, well, then it becomes a big problem. Conflict has literally shown up at the door. The couple is still happily married, but now… it’s complicated.

The other side of this is where two people who are total opposites are forced together because they share one common interest. This is the unusual wine pairing – a sweet Riesling with chili – that is the standard formula for the Buddy Story – rivals end up finding each other’s humanity while saving the day. Matching the by-the-book cop and the felon, the book-smart grad student and the streetwise dropout, the rough-and-tumble drunk with his uptight accountant – these all qualify. They don’t match in any way except for the mission they are on, but it is their differences that make them work. They compliment each other, just like wine and tacos.

With these buddy pairings, the tension starts from the moment they meet. The writer can keep this going as long as necessary, but the catch is that at some point, character growth should offer an opportunity for one to have an insight into the other. They don’t have to convert to the other side, but once they have that moment of realization, their growth just spills from the page, and the reader follows along. They realize that the odd pairing works great together if done in just the right way.

Not every attempt will be a success, and some readers will not accept certain pairings. If someone will only drink Merlot with dessert, don’t try to change them. Find something interesting to the writing part of your brain, and try out things. You might be surprised. And if you don’t believe me, try carne asada tacos with a hearty Malbec. Maybe it doesn’t sound right, but you will thank me later.

Posted by James Pressler at 5:37 PM