On this and every Memorial Day, I take a little time to think about those who served our country and never made it back. It's a difficult task. After all, I never died serving my country. I never even served in the military. The only tools I have to consider this kind of sacrifice are those of a writer, and I thought I would share how I put them to work. 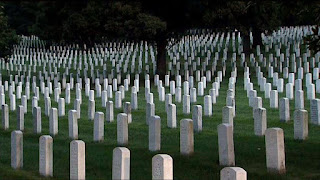 After my cousin, who served in Vietnam, passed away, I started talking with a number of veterans from different wars who are finally telling their stories about their time overseas. Some were very detached, discussing their life during wartime in the third person, others poured their emotions into every detail. I heard stories of heroism and terror, of confusion and of complete humanity. However, I also heard other stories that were never concluded. Those made me really think. I'd like to share a few of them for just that reason.

One man arrived in the Pacific for his first action, which was night patrol on a recently-captured island. He stayed close to a friend of his who he grew up with - they enlisted  and trained together. The patrol - about 40 soldiers - went into the jungle on a sweep. After a bit, one sniper shot rang out and his friend sunk to the ground. They returned fire, shredding the canopy with weapon fire. They had no idea if they even hit the sniper, but this man knew his friend was dead where he lay. His eyes were still open.

Another story was from a man assigned to a six-man detachment sent out on a landing craft to a small island.  The water was choppy, so the man decided to swim the last 100 yards. Others in the detachment jumped in, but they could not handle the water as easily. The man reached the shallows only to realize that the other men were struggling. He swam back to try and rescue them, and got one man to shore. The other three drowned.

Someone serving in Vietnam was the last man onto an APC driving out of camp. Last on meant first out, which could be a scary thought if the APC headed into combat, but that was the price of being last. A mile out, the vehicle was hit by a rocket, immersing it in flames. The blast threw him out, and because he was the last one on, he was the only one who escaped. Everyone else died in that APC.

They say nobody can understand the soldier's experience until they've worn his boots, carried his pack, and walked into battle not knowing if they would walk out. I agree, but I would add to that. For those soldiers that survive, they carry an extra burden. They carry stories. They now remember everyone who did not make it out of that battle. They carry those memories, and the weight, I imagine, is at times unbearable.

We hear soldiers' stories and think about what those people went through. However, Memorial Day is not for those soldiers. It is for everyone who never came home. That man on night patrol. Those men drowning in the Pacific. Everyone else in that APC. For those soldiers, we realize their stories were not allowed to be finished. They were in the middle of their story, and it was cut short by a sniper's bullet, deep water, or an explosion.

Memorial Day is about the stories not finished, the pages left empty, because someone put service to country before themselves. When we listen to veterans talking about what they endured, keep an ear out for how they talk about those who did not come home. Those stories are carried by the survivors, and we owe it to those who died to let them live in those memories and complete their story.
Posted by James Pressler at 11:44 AM