Making Big Ones Into Little Ones

I spent the better part of yesterday sawing branches from a downed tree on my property. It's a lot of work when you consider the size of a healthy tree. The task is huge, and the sight of a big tree that needs to be cut into fireplace-sized chunks is daunting to say the least. However, I had a secret weapon: I am a writer. 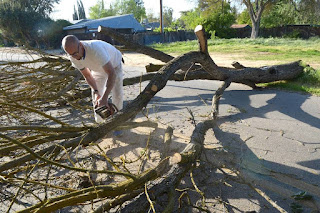 When I tell people about my first book, they are impressed that I completed such a task. Writing 72,000 words is tough enough, but then getting them in the right order and making them tell a story is even more amazing. People will hold my 300-page novel and say, "Wow -- you wrote this whole thing. I could never do that." Well, neither could I if I viewed it that way. Writing a novel in one sitting is just as difficult as cutting up a whole tree in one day. So I didn't.

I always liked the philosophy of those people breaking boulders in a quarry. The healthy approach was simple: "Making big ones into little ones" is much easier than "crushing an endless supply of limestone." They wouldn't crush the whole quarry, but instead just take one big rocks, break it into smaller rocks, and once they were small enough, bring on the next rock.

A novel is the same kind of creature. Try to write it in one sitting, and you either have a real gift, or you are hoping for failure. Instead, Just examine the little pieces that are required to making your story. Introduce the character. What is the challenge? What event sets the story into motion? What obstacles present themselves? How is each one overcome? How does it affect the character's journey? Each step is its own little writing assignment. Each section is obviously vital to the overall story, but they can be handled individually. They are the single branches, the individual boulders. Take them on one at a time, bring them to life, then move forward.

Usually it's easiest to start at the beginning, but not mandatory. My personal process is to go through the basic steps that set the stage, and create those sections first. This gives the character some flesh and bones, and they grow from there. And as I learn about the character, I am better informed about which sections I want to create next.

In an earlier post, The Opening Act: Setting the Stage, I explain the the basics of the three-act structure of most novels. This also offers the main questions that the writer needs to address to get the reader engaged. These should be easy sections to write, but if they are surprisingly difficult, then start thinking about how well you understand the story you are presenting.

The worst time I have ever experienced while writing a manuscript was simple. I thought I had everything prepared: I knew the character, the purpose, the adventure, everything was in place. However, my writing got stuck at around page 100. I still had 50,000 words to go and I couldn't get the story to move. Why? Well, when I thought about the different pieces, I realized I didn't really understand the transition that would bring the character to the second act. The story was fine, but until I understood that one little piece, it would never be completed in a satisfying way.

I now have a stack of firewood ready to go, along with some other branches I pruned for other reasons. It was a big task, and piece by piece, I got it done. And incidentally, I now tell people that my second novel, which I am now shopping around, is over 400 pages (98,000 words). They say, "How did you write all that?"

Now I just refer them to this blog.
Posted by James Pressler at 4:04 PM