I'm not perfect - I own that. I have my share of quirks, and not those kind of quirks that actually make me more interesting. No - these are the annoying quirks. I smoked for years and make sure everyone knows exactly when I stopped (April 20, 2002) and how I feel about it. I correct people's grammar during casual conversation. I break the mood during conversations. And I go on and on and on about the qualities of aromatic gin when all the person asked was, "Would you like a drink?" When it comes to annoying habits, I filled my plate.

However, people still like me (at least enough to say that.) 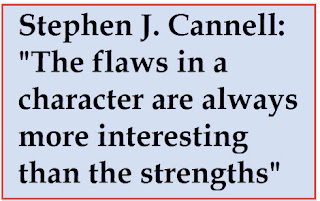 In literature, characters that really stick should seem like people in every way possible, which includes faults. If a character is without flaw, it can still be interesting, but only as a side note, a supporting character. Think of the people you know on the fringes of your life who are nice, helpful, and so forth, but there's something about them that keeps them at the fringes. It's not something bad, it's just that there's nothing particularly interesting. These people in your life are likely fine people, but without knowing more about them, there's no reason to explore further.

Now, just salting a character with quirks and annoying habits for the sake of making them imperfect is one way to do it, but these bad traits also present an opportunity to build upon the story itself, on the internal conflict, and challenges the character must face on their journey. Some can be pretty obvious, others can be ongoing issues. When we find out early in the movie that Indiana Jones hates snakes, we just know that he will be encountering more snakes before long. However, other subtle touches can keep a slow burn to a story's tension.

Let's look at my personal list above and see how they could play out. The whole smoking thing can play in the immediate way, like dealing with people who smoke all the time, but it can be a deeper point. If we learn that the character started smoking as a form of self-medication to deal with terrible anxiety and stopping was a very important step in recovery, then every time anxiety grows, we can tap that string and show how our character is feeling tested, pushed toward his old habits. We know the importance of not smoking but the reader will feel the building urge to pick up a cigarette. Probably not something to base a story on, but definitely enough to support the tension.

Grammar-correcting and mood-killing are also not good subjects for a plot to pivot around, but they can become obstacles to overcome. If part of our character's journey is to rise up the corporate ladder, how helpful is it when he tells his boss, "Actually, if you want to be grammatically correct, say the program is doing well, not good." The reader sees that the character can be his own obstacle, and his pursuit need to be personal revelation before he can ever conquer the larger task. As for someone going on and on and on about the qualities of aromatic gin, maybe that's just a detail that informs the reader about the character's flair for detail, but it can also contribute to the other issues about killing the mood or correcting other people.

A good character doesn't need to be damaged to be interesting. However, characters become far more familiar to the reader when they see common traits for better and for worse. And when those traits can also make a story more rich and intricate, maybe a few imperfections are just what a perfect story needs.
Posted by James Pressler at 12:41 PM