When I walk along the sidewalk with someone, I have a compulsion to walk on the side closest to the street. If I talk about an upcoming event and fear I might have put a jinx on it, I knock on wood. When I find a penny, I pick it up because I believe that all the day I will have good luck. And don't even get me started about my quirks before football games. Whether these are superstitious behaviors or just weird but innocent mannerisms is not important. We all have them, and writers are no exception. The question, again, is whether they are superstitions or just weird things. 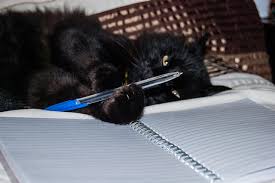 Superstitions are generally considered irrational actions we do as a response to some outside event. The important word is irrational - with no explainable purpose. In my list above, are those irrational? Well, walking close to the street is actually a habit of good manners - a polite person walks closest to the street to shield the other person from anything kicked up by passing vehicles. If one knows that, it's just courtesy; if not, it's irrational. Knocking on wood? Well, that's just a weird compulsion, so we can call that superstition. Picking up a penny is just good financial management, but the day's-worth of good luck slides toward a little bit cuckoo. It's all perspective.

So, what about writers? Here's a few common things I see in writers, and where they fall on the rational spectrum.


"If I don't have my writing pen and special pad, I can't write."

Well, nothing stops a person from writing with just any pen and paper, or typing, or whatever, so that looks like superstition. However, there is some sanity to it. As I've mentioned before, developing writing skills is best done through habit. I often discuss the rituals I have for writing - my laptop, my gin and tonic, and so forth. Having these things puts me in a writing mind, and makes it easier to create. Fortunately, I can write without gin and such, but given the choice, my familiar things trigger my writer's brain. Some people do let the items control their actions, and that's where the line is drawn.


"Once I start something, I have to finish it before I can do anything else."

I get a little scared hearing this one, and I hear it far more often than I'd like. Sometimes this is just a habit to block out a project and take it to the end, but what happens when that person decides to write that 90,000-word novel? That drive is healthy, but if they get bogged down in a spot, a timeout can be very valuable. And, of course, sometimes our projects die on the page and we just have to let them go, or at least shelve them for a while. Maybe this is more of an obsession than a superstition, but it can be a setback.


"If I read my work before I complete it, I have to stop everything and edit it."

I am actually a fan of this superstition. Sometimes we get bogged down in our writing, and reading it feels like a good idea. Maybe it works for some people, but I believe that a writer's job, first and foremost, is to write. Getting lost in the editing part, perfecting past chapters before the rest of the chapters are written, these are all little traps that keep us from the process of writing. There will be a time to edit, change, and rewrite, but I am a firm believer in not looking back until I reach my desired point, then switching into an editor (with my editor glasses and scotch on the rocks) and playing out that role.

As writers, we will develop a lot of quirks and habits as part of our craft. Whether they are superstitions or just odd behaviors doesn't matter. The only part we need to consider is whether that habit helps or hurts our growth. The rest is academic.

Now I have to sign off. Preparing all the props and rituals for this weekend's Bears-Packers game is a two-day task.

Posted by James Pressler at 1:27 PM