A lot of my posts in the past two months have been about finding and uncovering stories rather than writing stories. Be warned - this is no different. However, this is more about a special kind of story. There's often a story that is right in front of our face, hiding in plain sight. These stories exist in a way that we don't fully appreciate until we are offered one little fact that changes our perspective. At that point, all we can see is the new story. 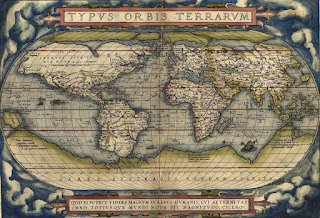 I have a print of an old map by Ortelius, a 16th-century cartographer, hanging in my living room. As a map it holds no value - it's one of those where Asia is way too small, Australia is merged into Antarctica. the Americas are horribly distorted, and some parts are just missing. Use this for navigating purposes at your own risk. Rather, I have it because it looks cool hanging by my wine rack and serves as a nice conversation starter. I also have it because it has a hidden story, and I let people study it for a while to try and spot it. They never do, but it's right there.

Sometimes the hidden story is very subtle. Look at the websites with strange photo positioning and you see how there might be someone looking through a window in the background, or a reflection in a mirror that ruins the scene. Those are details that are deeply hidden, but once you see them you can't unsee them. Those become interesting stories to write, and learning that technique is an art form.

Consider a story about three people talking. Simple, right? Well, a reader assumes that three people talking means they are talking to each other, which is called a conversation. However, if we play with the little cues that suggest a conversation, we can manipulate the scene so that it is actually two people having a conversation, while the third person is a ghost, or a shared memory they have, or a stranger talking to himself. We hide that fact at first but never lie about it - we just leave out anything that would imply two-way discussion with the person not involved. Then, when we reveal that fact, the reader notices that this has been right in front of them all along.

The thing about my map is that a little knowledge of history is involved. Not everyone is fluent in the details of the Age of Discovery, so it's hardly their fault that this detail is overlooked. However, once that key piece of information is introduced, their world changes. A good story does that as well.

Think of the classic whodunit where the guy and his friend head out to solve a crime. In this, the big reveal is that the guy's friend is actually the criminal who has been trying to foil the investigation without giving himself away. The writer not only has to map out the main story, but create a hidden story on how the criminal quietly plans things, creates red herrings, and misleads his friend. This creates a second story which is not written until the big reveal and then is explained. At that point, the reader can never read that story again the same way, and looks at it with this new knowledge. The world of that story changes.

The hidden story is a technique that demands intense attention to detail, not only to hide things in plain sight but keep the reader focused so intensely on the main story that they do not put together the hidden story until it is revealed to them.

Oh -- the map? Ortelius did this weird thing where he mapped out Antarctica and a number of coastal details. However, according to the accepted history of civilization, the land mass known as Antarctica was not seen by human eyes until the 19th century. It has been a subject of theory and conjecture, but never seen, yet this person had enough information to put it on a map.

And so we no longer think about the map, but the squiggly lines at the bottom that represent something that nobody knew about.
Posted by James Pressler at 10:58 AM