Everyone knows that one funny person - someone who is the go-to for a good laugh, an entertaining story, or just that look on life that makes you smile. Writers can learn a lot from these people - delivery. presentation, and just how people make the simple story entertaining. However, writers can also learn that there is a big difference between the funny person, the funny story, and funny writing, and in particular how they are not always interchangeable. 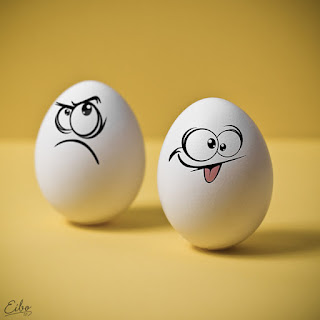 I was invited to participate in a comedy slam this week, and I decided to jump in. It isn't stand-up per se, just amusing storytelling and wit. To prepare for this, I started thinking about some particularly amusing thing that happened and how I could do a funny five-minute set about it.

You guessed it - things got weird at that point. I realized there were a lot of funny, weird events that happened, but they weren't funny stories - just events. When I watched a pigeon fight a squirrel for a bread heel, only to see another pigeon steal it behind their backs, that was funny. Was it a story? Not really. I literally told the event in one sentence - a story takes much more. Watching two people walking down the street walk right into each other because they were both texting? Funny, and kind of a social statement, but where's the story?

One of the biggest mistakes beginning writers make is confusing an idea for a story, and humor is the same way. In that regard, urban wildlife fighting over scraps or Millennials walking into each other is funny, but not humorous.  Humorous takes something a little stronger.

Let's recall what makes a story: a character, an event, personal confrontation, and change. Someone encounters something that does not fit their way of living, thinking, or doing, and that interactions brings about some kind of result. When we work with humor, we take this story component and distort the framework. We stretch, bend, and contort, in hopes of exaggerating the aspects that will entertain our audience.

Of course, the immediate go-to is to make everything bigger, stronger, louder, and more absurd. This gonzo style of humor has its place, but it is far easier to fail at this than succeed. Rather, we write humorous pieces when we exaggerate one particular aspect of a story and expand on everything that this aspect touches. We allow one part to inflate itself beyond its reality, and let the distortions be the entertainment.

Have you ever been a passenger in the car of a terrible driver? Maybe they're not terrible, but their driving makes you uncomfortable? (Anyone who taught a teenager to drive immediately qualifies) This is fertile ground to point out every mistake that driver made in extremis and emphasize the reactions accordingly. Do they take a turn too fast? Describe the screeching of the two tires that remained on the road as you are thrown to the side, clutching onto your seat belt for dear life as the driver rips through that left-turn lane. Do they stop too hard? Then every stop is like a Heimlich in the gut as you jerk forward, your forehead so perilously close to the dashboard as the car jerks to a halt at the stoplight.

Those examples have no jokes, but the exaggeration brings the discussion beyond its reality, and hopefully entertains the crowd as well. As for me, I'll be trying that at the Black Road branch of the Joliet Library coffee shop, Thursday, during the comedy slam that starts around 6 p.m.

And undoubtedly, that experience - for better or worse - will make for some humorous writing.